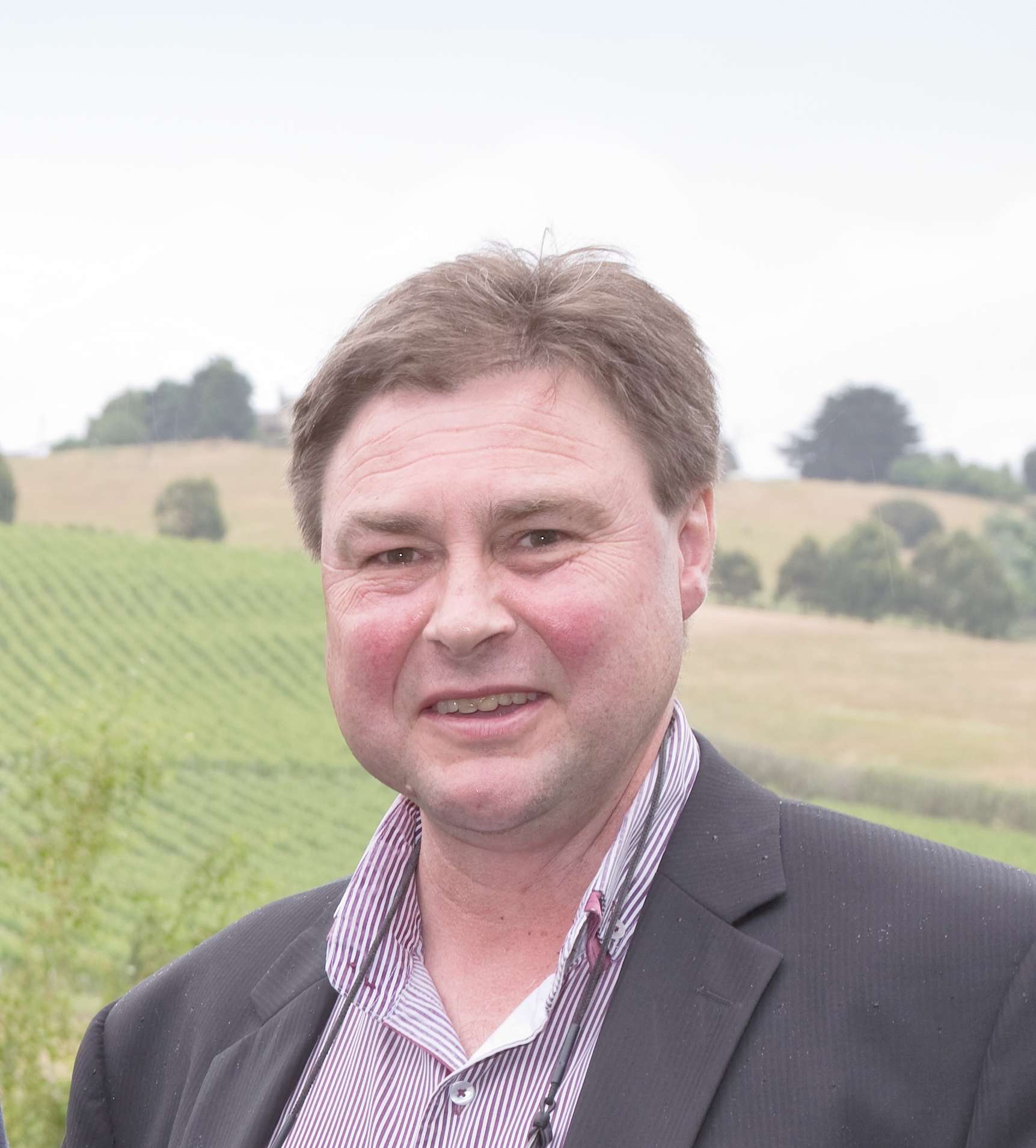 This month's Dirty Hands showcases some of the enormous variety of Landcare work going on right through winter around the State - everything from planting trees to dung beetles to plastic pollution, and Scouts doing it for our kids.  There's a place in community Landcare for everyone, an issue for everyone's interests, and plenty of space for the community to own its problems and find practical and enduring solutions.

It's this 'bottom up' approach that is the strength of community Landcare, and why the movement is still going strong after almost 30 years. Unfortunately it sometimes feels that the Federal Government, which fostered the movement in its early years, just doesn't get it.

Over the last couple of months we've received many calls and complaints from Landcare groups about the Commonwealth's Environment Small Grants program, which opened before Christmas. It seems many applications were rejected - not because their projects were necessarily poor, but because the groups applying were deemed 'ineligible' due to their legal status. We also know of alot of other instances where groups didn't even submit applications because of this.

We know from our involvement in the National Landcare Network, the peak body for all State Landcare organisations, that this situation was reported widely across the country.

We appear to have a Landcare program in name only, with the politicians and bureaucrats responsible for it not willing or able to walk the talk of what community Landcare is about.

20 years of schools plantings at 'Leighlands' 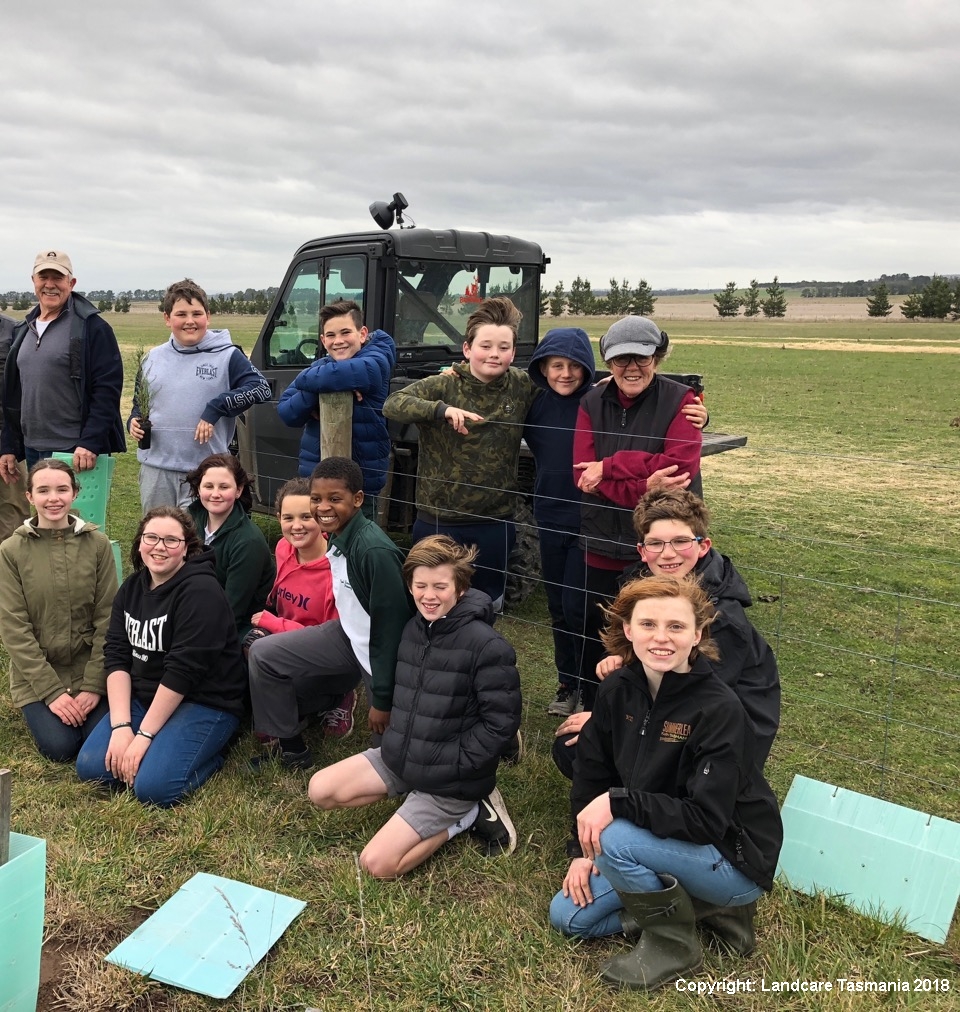 Perth-Evandale Landcare recently hosted East Launceston Primary School for a tree planting day at 'Leighlands'. The day marked 20 years of engaging with schools to plant trees on the property. Well done to stalwarts Lyndley Chopping (below left) and Gwendolyn Adams (below right, also the owner of 'Leighlands') from the Landcare Tasmania Members Council for hosting the day, and to the kids and teachers from East Launceston for a great effort on a blustery, cold day.

Thanks also to our friends at 15 Trees, who donated trees for planting on the day. 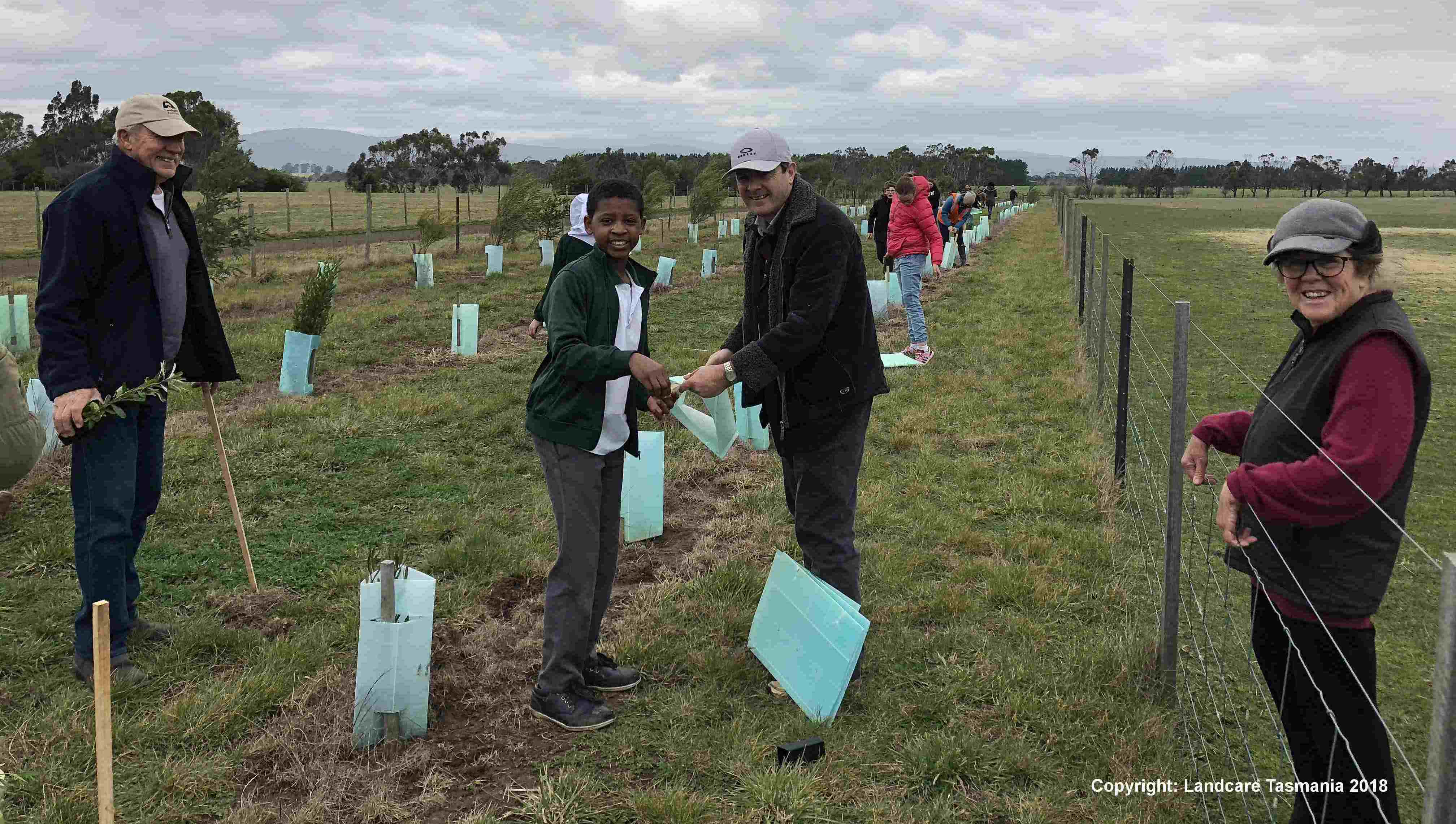 Think twice about your donations?

The Landcare Tas office has been contacted a number of times recently about donation appeals they've received from Landcare Australia. Some people have been surprised to discover that their money is unlikely to benefit community Landcare in Tasmania.

Although we share similar names and logos, there is no relationship between the two organisations. Landcare Tasmania is a community based organisation that works closely to support Landcarers on the ground here in Tassie. Landcare Australia does not have an on ground presence here. It primary role is corporate fundraising to support Landcare projects, but unfortunately we have seen little of that here in the island State.

Donating to Landcare Tasmania ensures your money stays in Tasmania and is used to support the thousands of people working in our State for our bush, coasts, land, rivers and wildlife. It's also tax deductible for amounts over $2.

It's the same in any organisation - from time to time saying goodbye to old friends in order to make way for new people and ideas. There's no exception here at Landcare Tasmania, with some recent departures from our Board and Members Council. 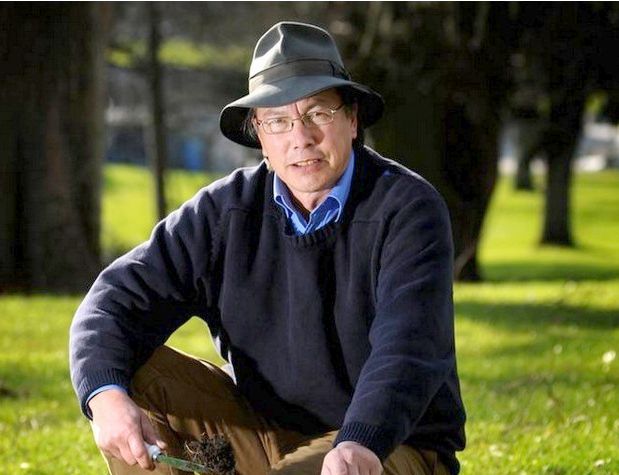 Our Chair for almost 3 years, Roger Tyshing, has moved on to focus on his new role as manager of the Hagley School Farm, and also to continue his work for Tamar NRM and the Migrant Resource Centre (North). Roger stepped into the leadership role of Landcare Tasmania in 2015. During this time he steered the organisation through the challenge of reinvigorating community Landcare in Tasmania. This task has included a refocus on services for members, clear delineation or our organisational identity, new communication platforms and an overhaul of our governance structure. 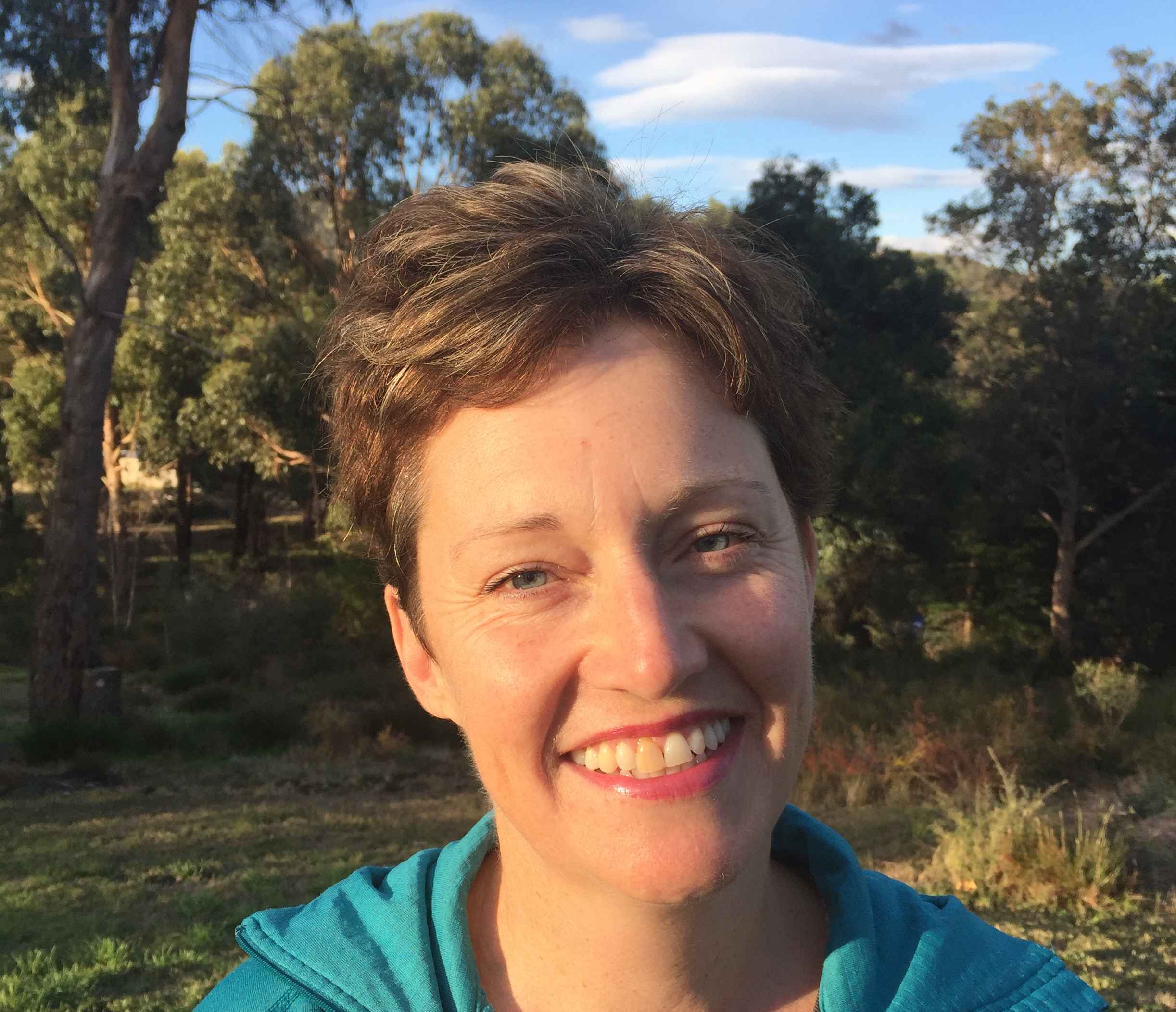 Sharon Smith came to Landcare Tasmania after establishing the Acton Park Landcare Group on Hobart's eastern shore. Her professional background in strategic financial planning quickly marked her out for our new Board, established at the AGM in September last year. Sharon took on the role of Deputy Chair, but unfortunately has had to move on due to taking on a new role as CEO of Wildcare. We may have lost Sharon from the Board but we'll be seeing her around the traps through our connections to Wildcare. 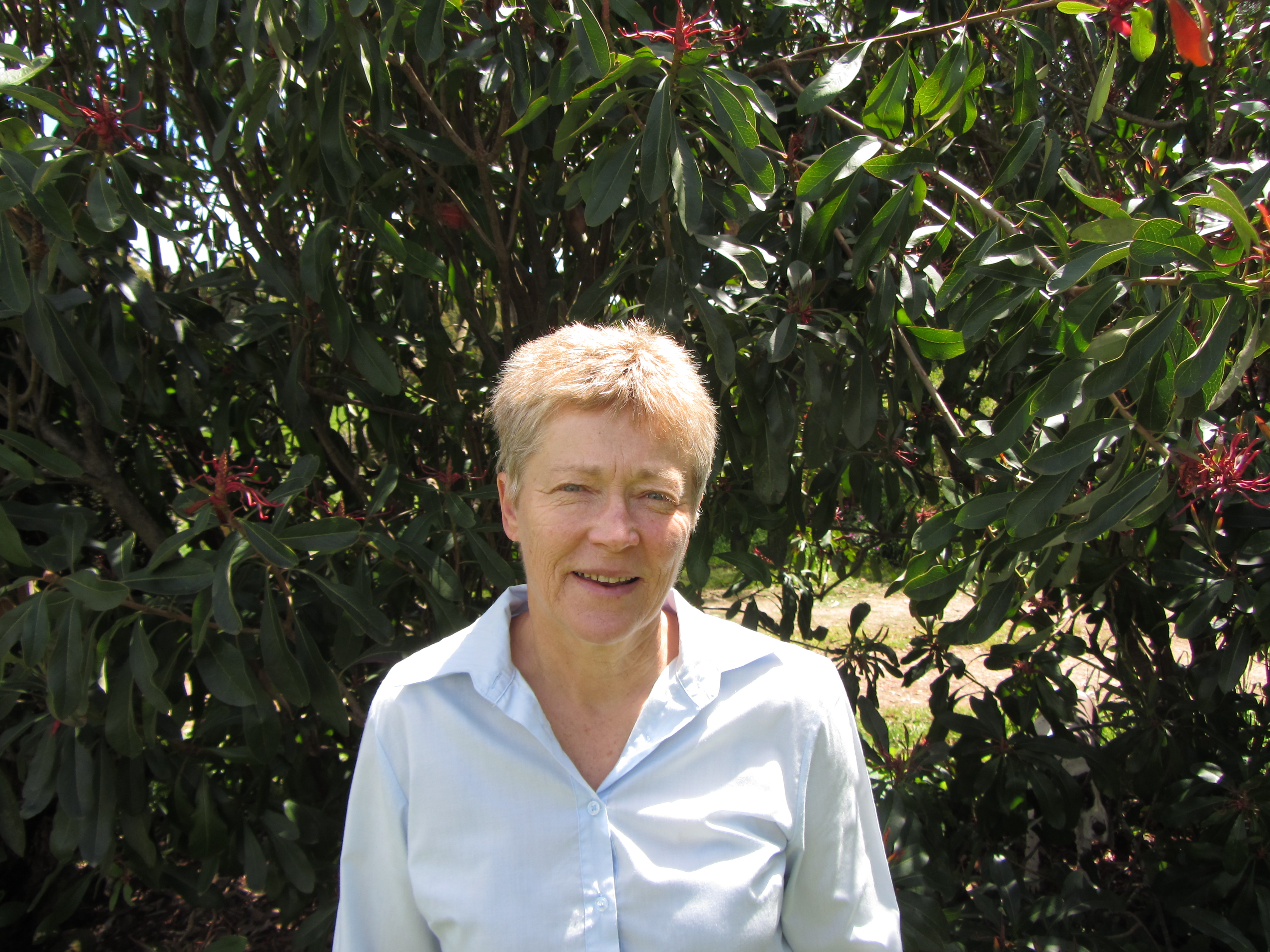 Anthea Fergusson left our Members Council in May, after many long years of service to Landcare Tasmania. Anthea took on many key roles during her time with Landcare Tas, including as Vice-President and also in the important role as our nominated Director to the Board of the National Landcare Network. Anthea put in countless hours to the NLN task, helping ensure Landcare has a strong and effective voice nationally. Her work in these and other areas is deeply appreciated and will be sorely missed. 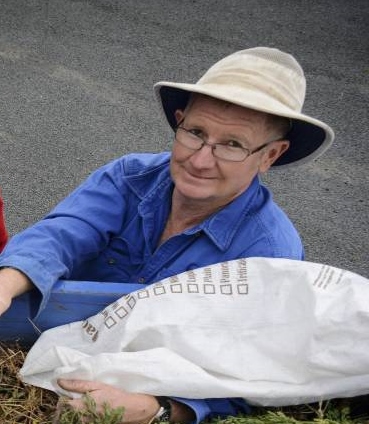 These changes will mean some new faces coming on to our Board and Members Council. You can find out more about becoming part of our Board, which is seeking Expressions of Interest to fill the gaps left by Roger and Sharon. Similarly we'll shortly be inviting Landcare Tas members to consider putting their hands up to join our Members Council, which will be expanded to a size of 15. Members will be notified of details shortly. 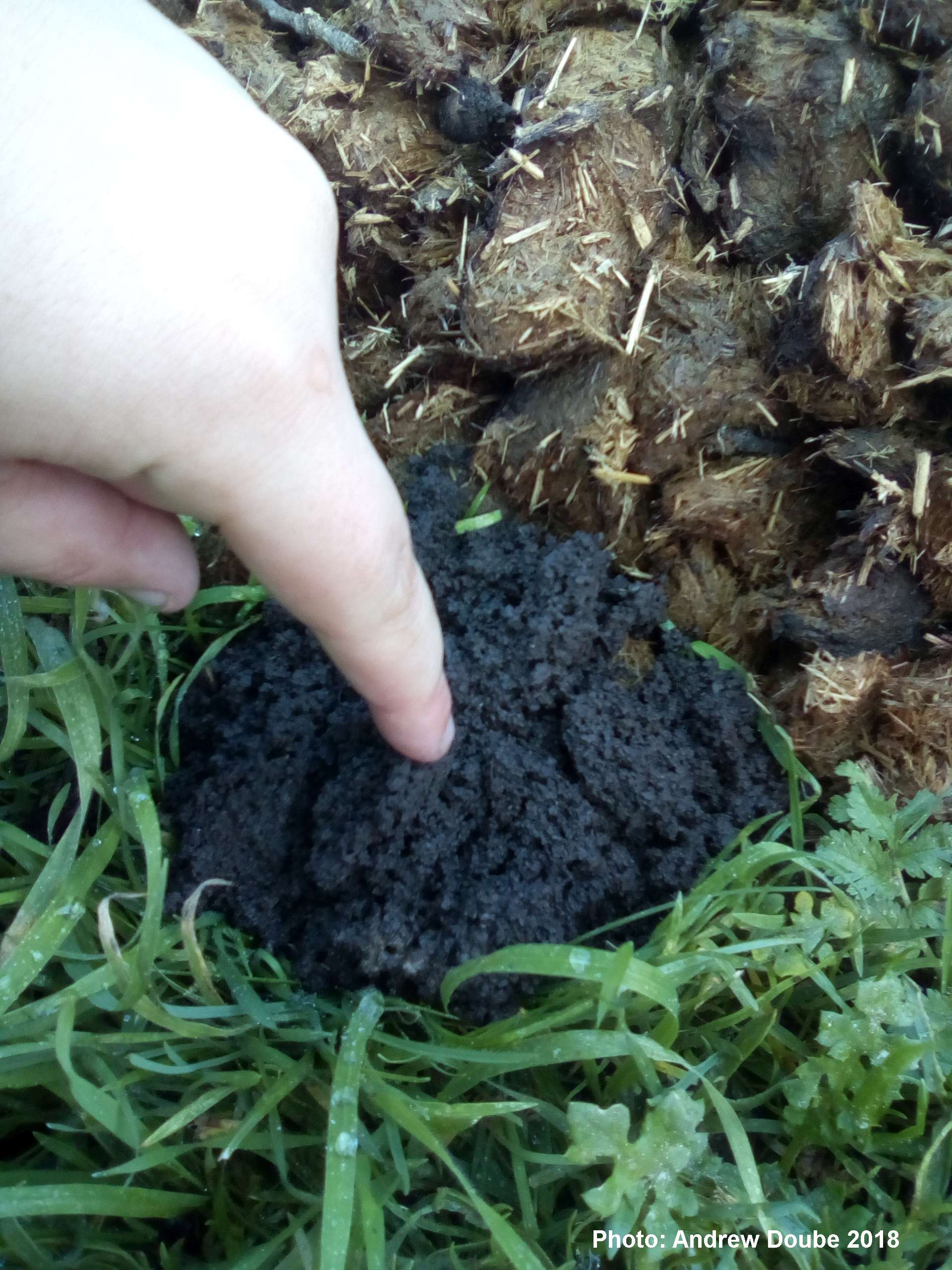 OK it was never a particularly good joke, but...

Clarendon Value Primary School, a Landcare member group, has launched its dung beetle breeding program. Students from Bayview Secondary College are also designing monitoring programs and equipment to support the project. The project has so far set up a breeding colony for the dung beetles, which will be released onto farms in southern Tasmania.

Dung beetles play a key role in cycling nutrient from animal dung into soils, which also helps limit nutrient runoff from the soil surface into our rivers and waterways. 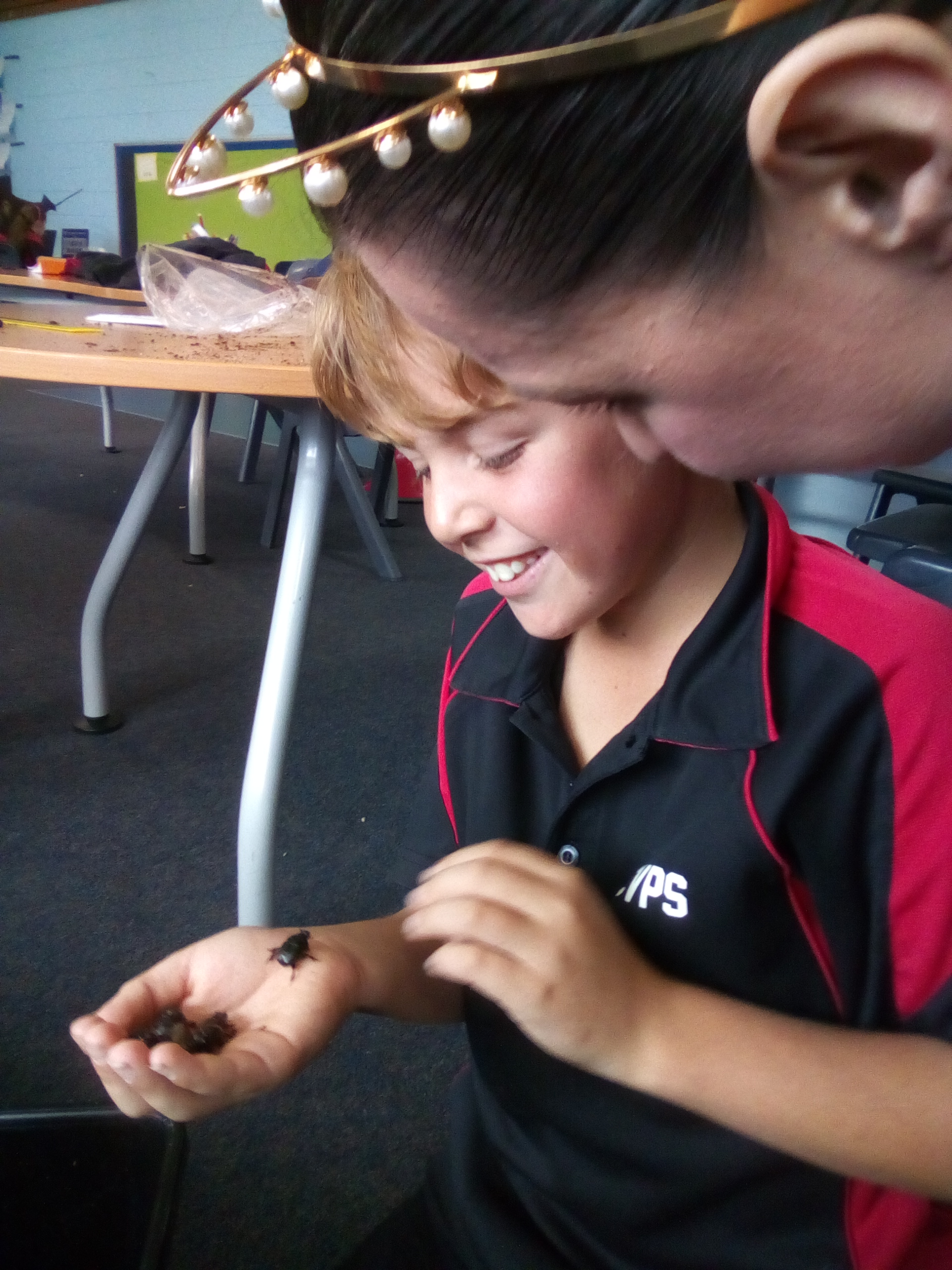 Latest news from the project is that the beetles are on to the next stage of their life cycle. They've moved from the dung on the surface to burrowing deep into the soil (top left), accelerating the cycling of dung, and nutrients.

For more information on the project, including video of our industrious beetle friends and coverage on Southern Cross news CLICK HERE.

New faces on the team

As well as changes to our Board and Members Council, there's some new folks helping drive the daily work of Landcare Tasmania.

We welcome Anne Rathjen (left) to the Landcare Tasmania team. As the new Business Manager Anne brings many skills to strengthen our support for our members as well as that to our staff, Members Council and Bboard. Anne lives in Blackmans Bay with her husband and two children. Her son has already donned on the mini hi-vis Landcare vest for his local school Landcare working bees.

We are currently also hosting Nick Broadfield (centre) from the University of Tasmania. Nick is completing an honours thesis on Gorse distribution factors in Tasmania - a subject many of us are keen to hear more about. We have worked on gorse management across the state and are providing Nick with access to our database of past projects for his research. We look forward to the findings of Nick's work.

Thanks also to our most recent volunteer Bella Windfeld-Peterson (right) who is helping out with social media and our events program in the office. With such a small team we are grateful to all our staff and volunteers who work together for the community Landcare movement across the state. 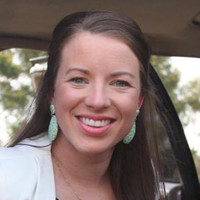 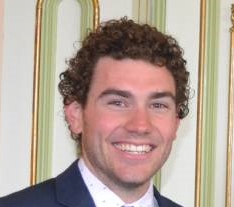 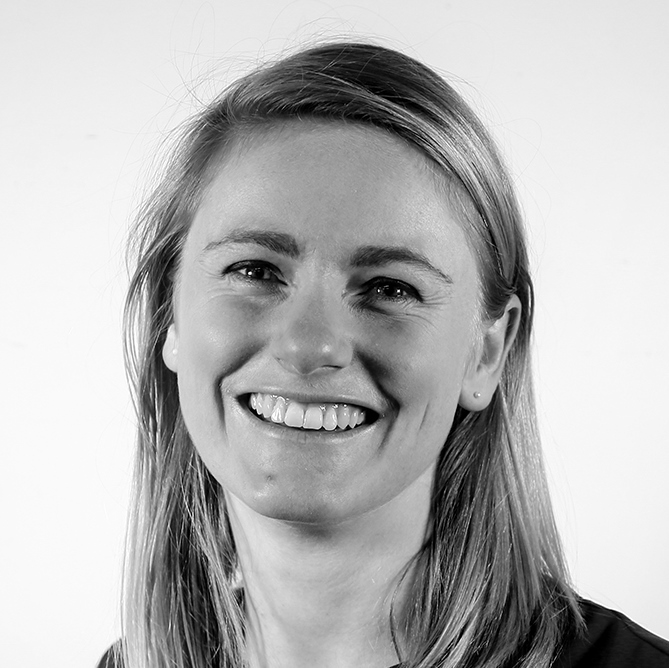 They're joining the rest of our office team:

Want to get involved?

There's lots to do at Landcare Tas, and we're always on the lookout for new volunteers. If interested please call the office on (03) 6234 7117 or send an email to [email protected] 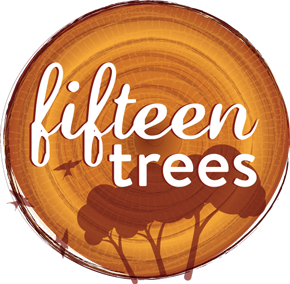 It is always tree planting weather (well almost) and with the support from Fifteen Trees, our members will be planting over 1,200 trees around the state in the coming months. This member service builds on the great work already going on by our members and contributes to the remediation of our natural and working landscapes.

The support of Fifteen Trees and its corporate contributors has been assisting tree planting across the country for the last 9 years.

Great to see another lot of new community Landcare groups have joined the Landcare Tas fold.

Like all new groups they'd probably love to hear from people in their neighbourhood. To get involved, or just say hi and offer a welcoming hand, just check out their profiles on our website.

Reminder: You can find details of more than 200 Tasmanian Landcare groups on our website. 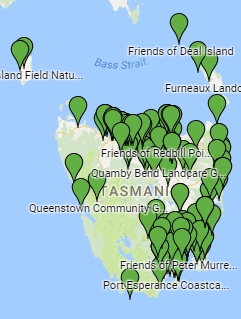