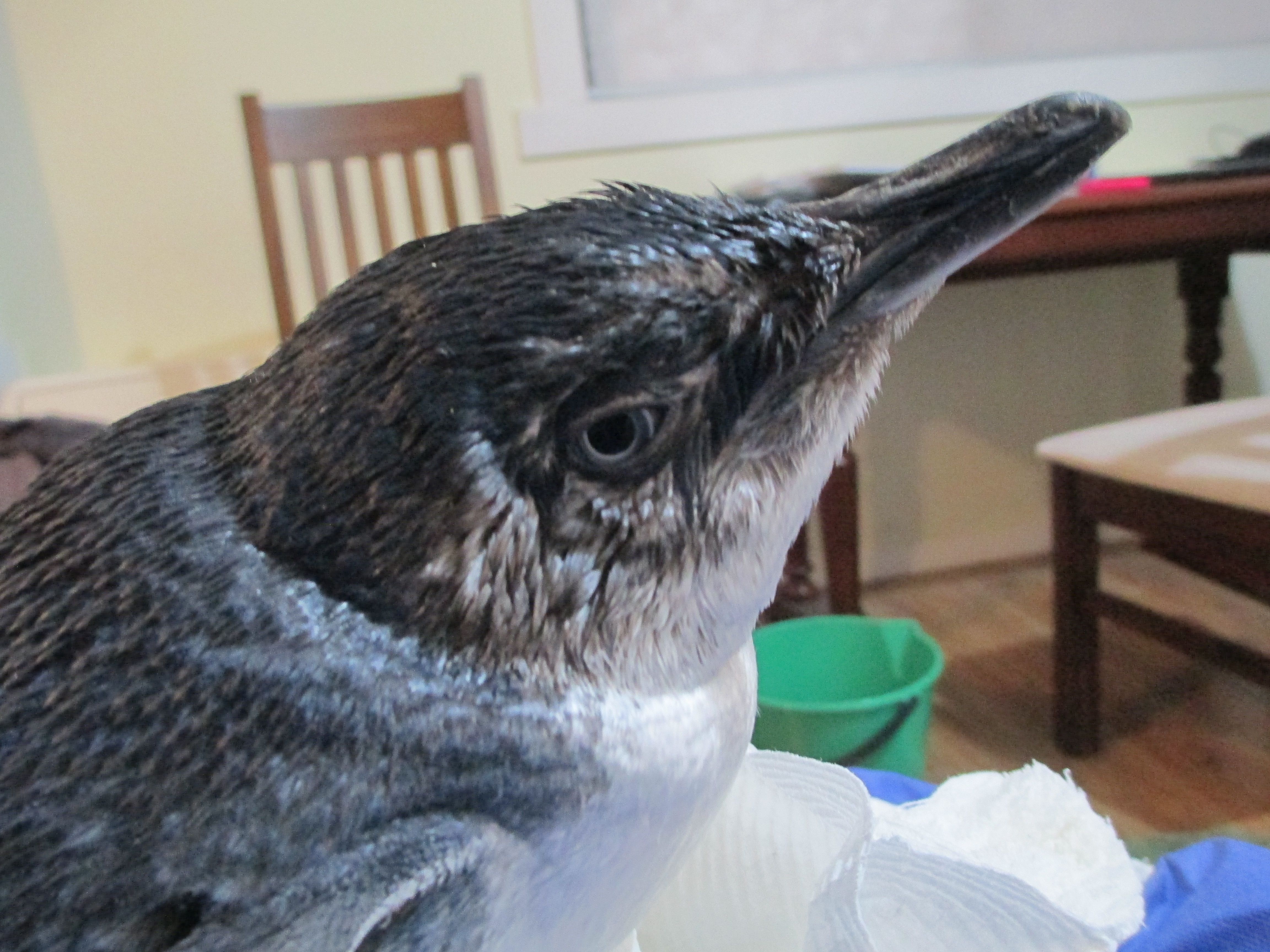 The first devastating thing that happened to Arthur was that he got caught in oil prior to moulting, which meant he could not hunt and after moult was severely underweight.  He transferred this oil to his burrow which, after he had moulted, also then coated his brand new feathers. 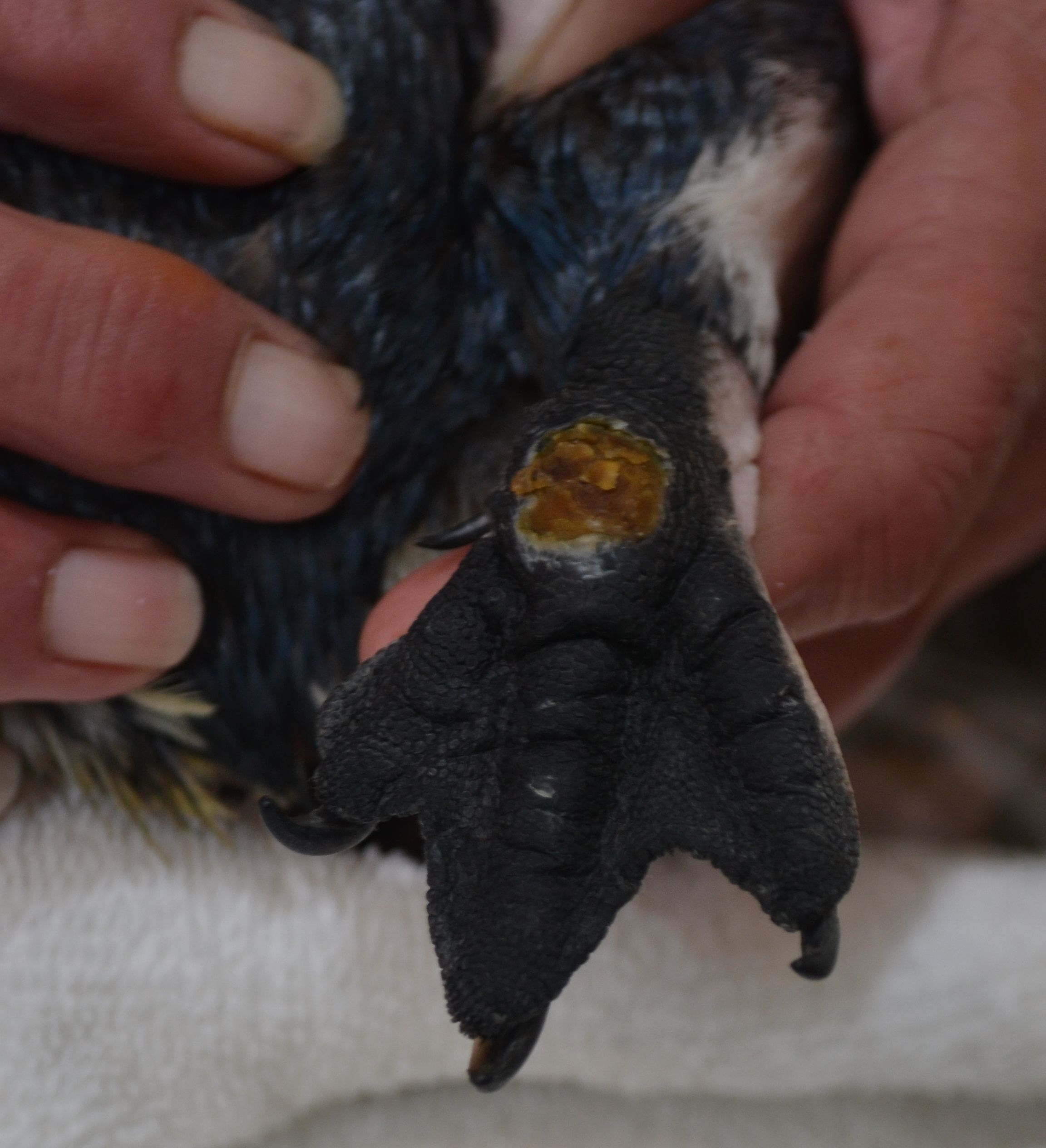 Then - on his way to sea, it appears he was caught under a vehicle, and suffered a traumatic brain injury, lacerations to his face and eyes, slices scraped off his bill, and the feathers on his face appear to have been singed by the hot chassis. To escape, he has kicked himself free, and in doing so cut and burnt his feet.

"When he first came in, he was so weak that his neck could not support his head"

Despite these traumas and huge hurdles to jump, Arthur is showing great determination and has shown his fighting spirit and personality that will allow him to strive for recovery.

"It will be a long haul for him and our team (especially our carer) but so far the progress is promising and his personality shows a bird who will continue to strive." said Penguin Rehab and Release.

The two major problems that he continues to deal with are first, his poor feet, and second, his lack of waterproofing. 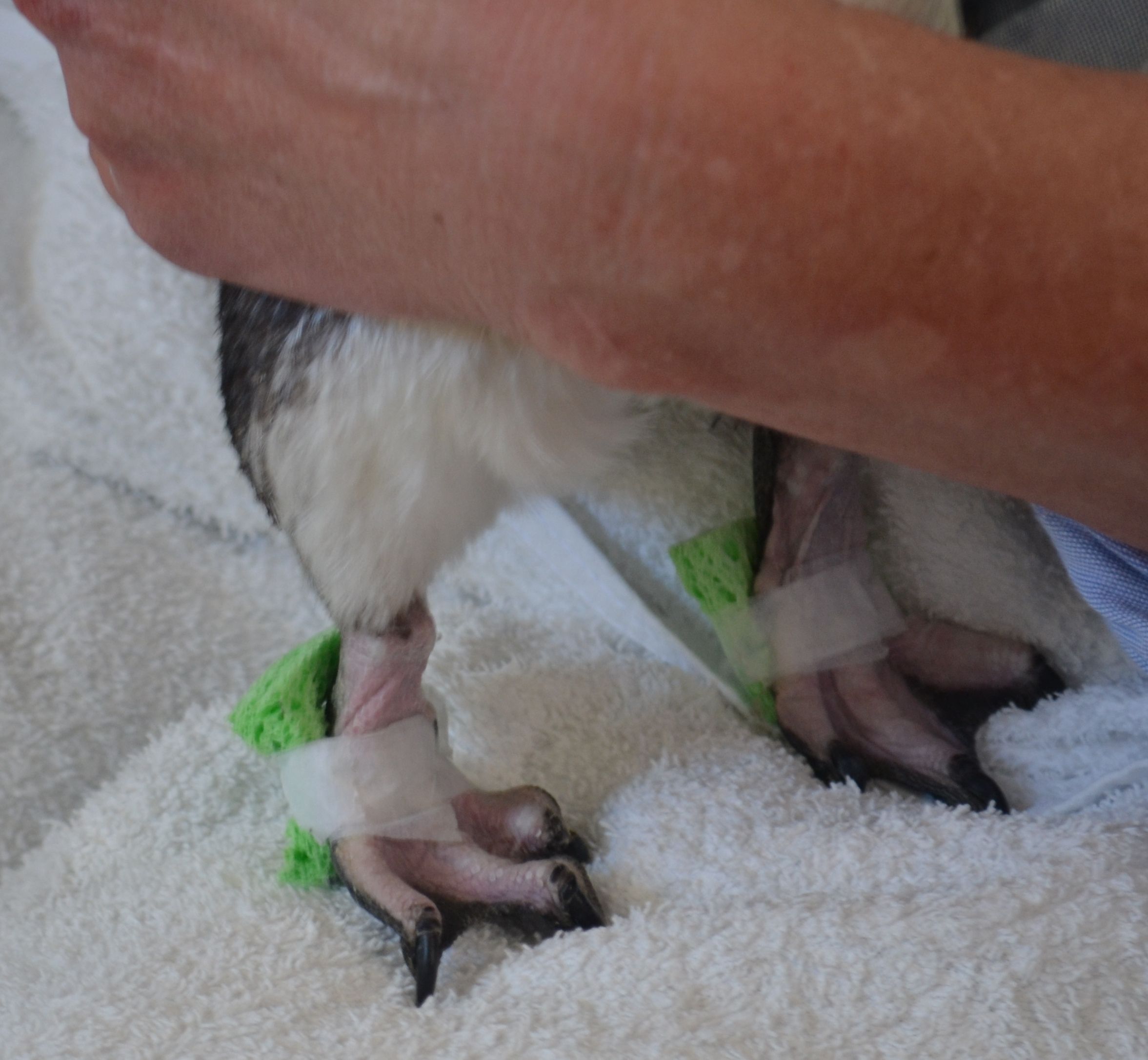 On both feet, Arthur wears little sponge "clogs", and special burn dressings for his wounds.

He will need to spend an extensive amount of time in intensive care as he requires regular changes to the dressings on his feet and specially designed surfaces to stand and walk on.

Even when Arthur has recovered, he will need to remain in the facility until he moults, which won't be until early 2020 as the oil contamination and feather damage mean he isn't waterproof.

Penguins have 3 times the feathers of any other bird (10,000) that form an overlapping waterproof coat that protects their thick down which keeps them warm in the sea.  They spend a huge amount of time preening to keep their feathers in perfect condition, using a waxy oil from their preen gland to maintain their waterproofing.  Anything disturbing the outer feathers can render them not waterproof, so they will no longer be able to dive or hunt 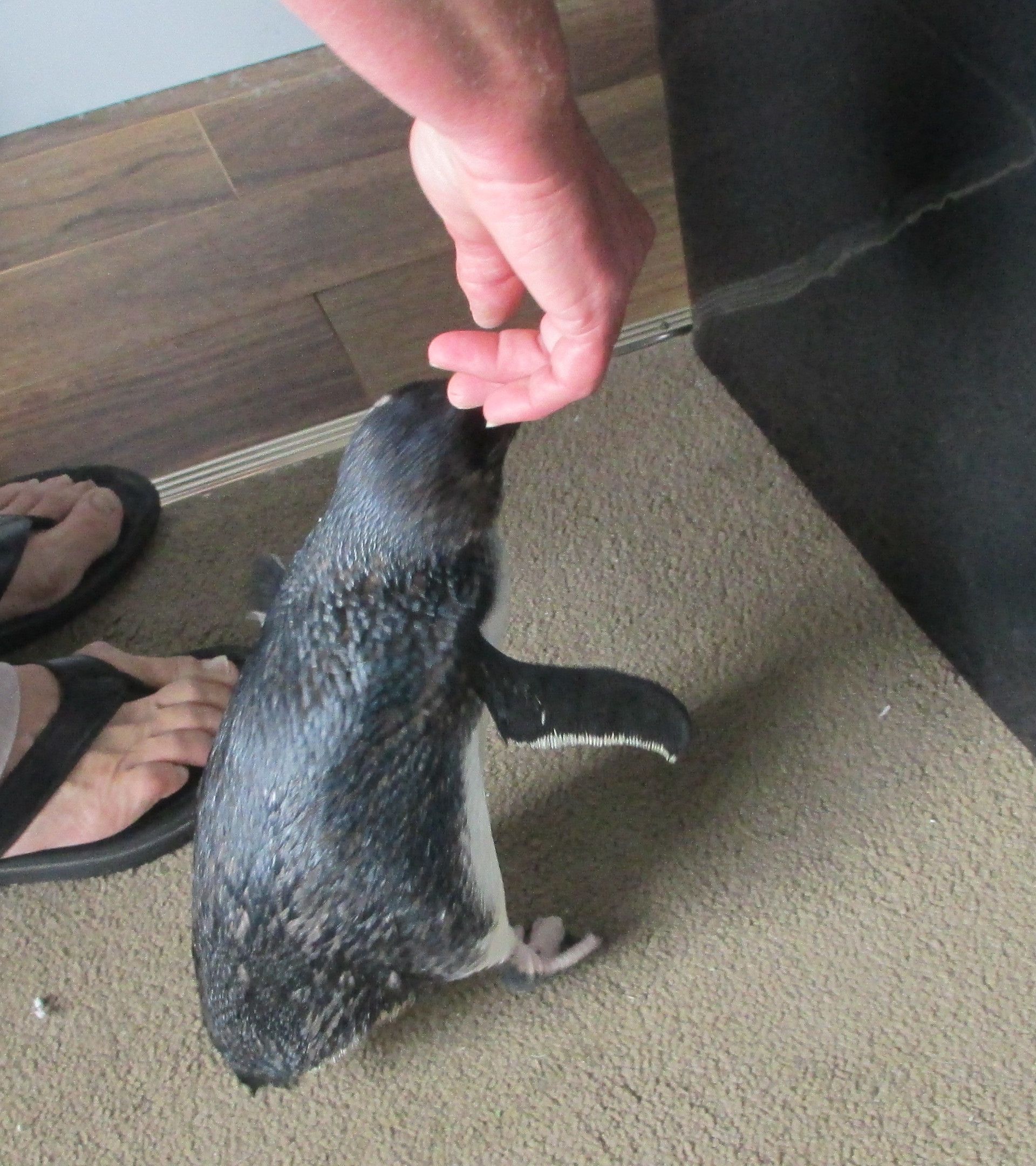 "Even though he's been through an awful lot, Arthur is proving to have a very cheerful disposition.  He is quite talkative and excited when he sees people"

Arthur even happily and politely takes fish from his carer.  Normally feeding a penguin means force-feeding, as wild penguins do not recognise dead fish as food (they are hunters, not scavengers). 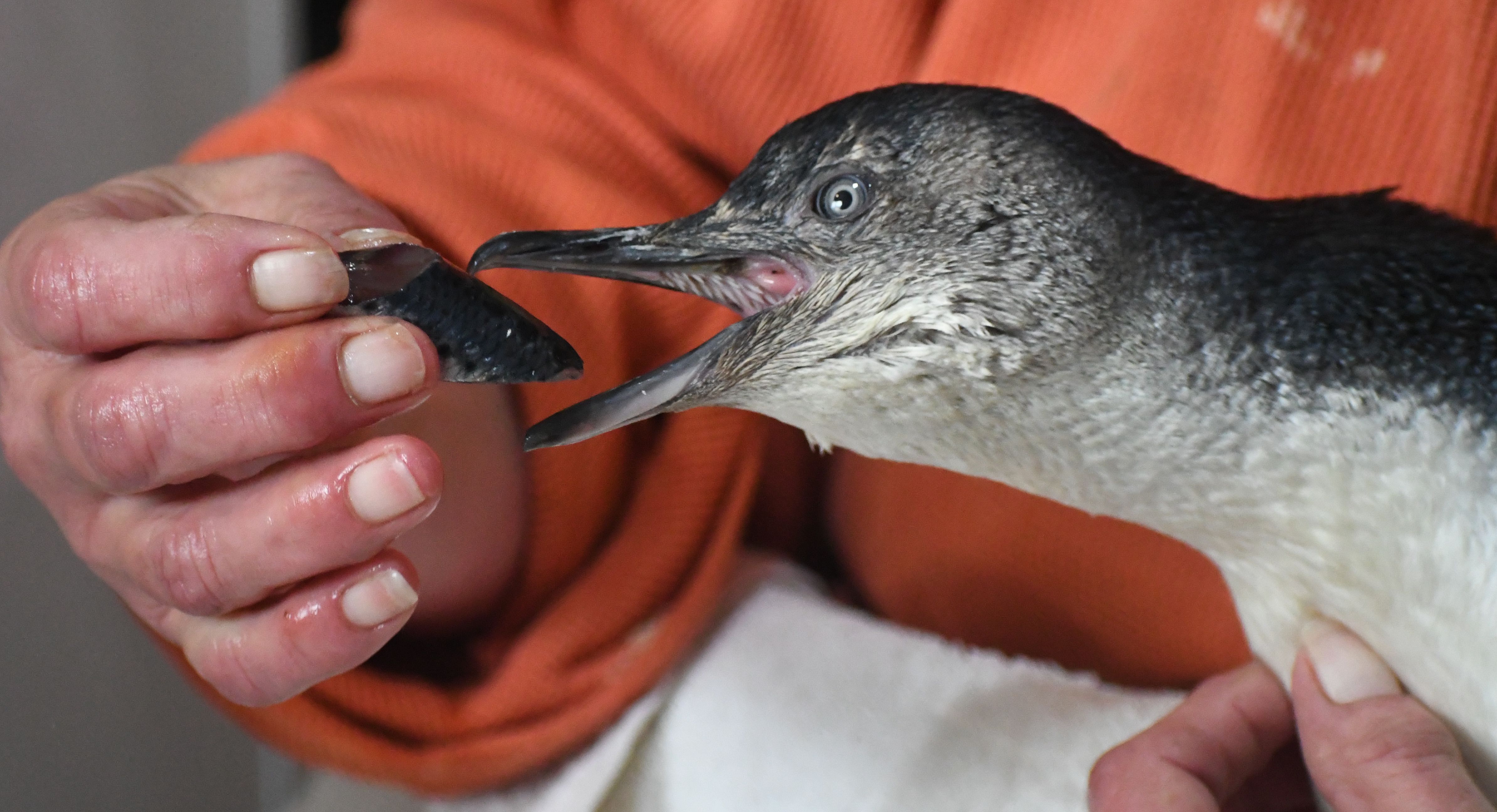 Presently, Arthur goes into an outdoor hospital cage during the morning - it has a seawater paddle tray with foam inserts to cushion his feet. In the afternoons, he has a short swim in the pool where he practises diving and is very interested in his new environment.

"He is also quite vocal, singing shortly after dawn to say it's time for breakfast, as well as other times through the day, and night!"

At feed time, he "purrs" at his carer, and will sometimes join in with the humans' conversations. 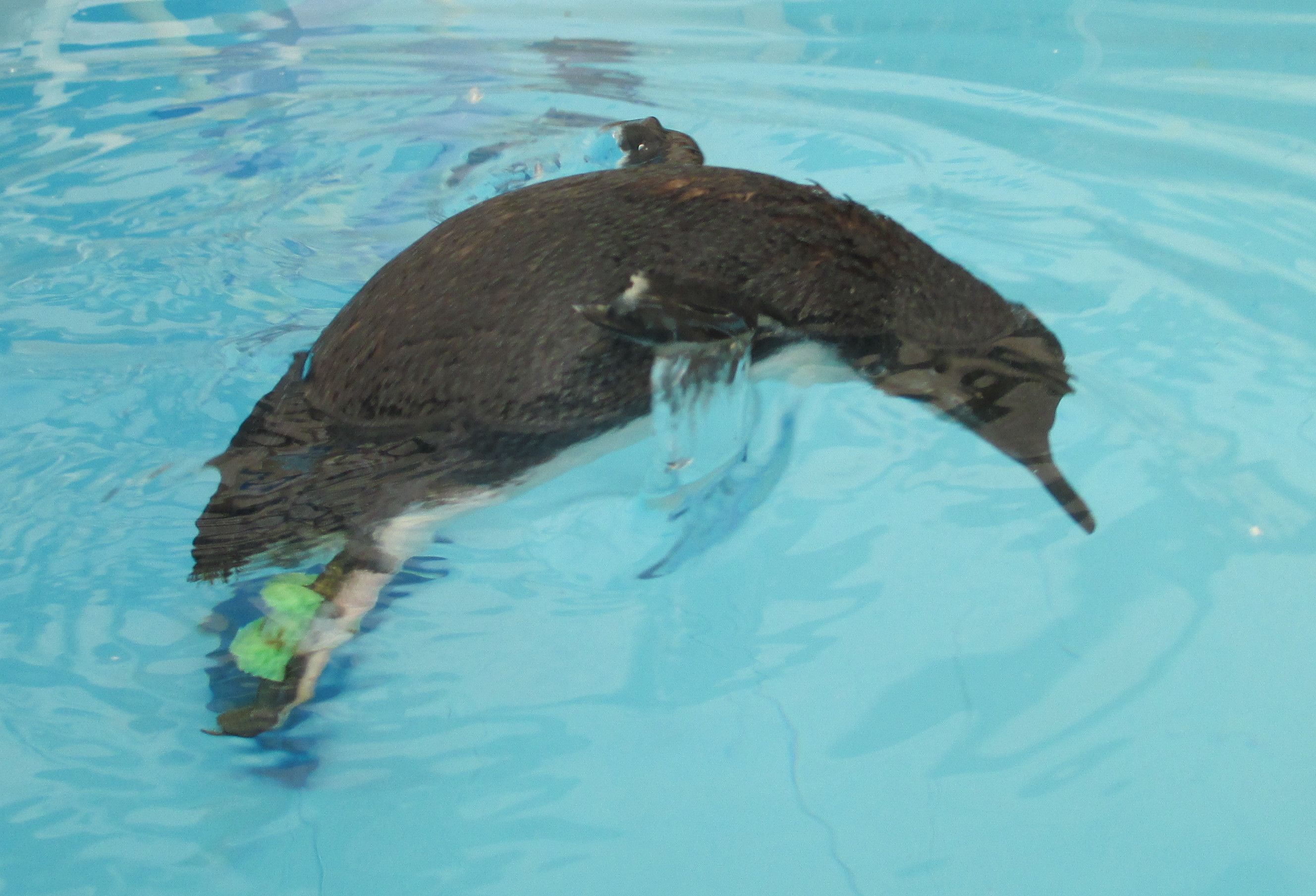 "He really is a wild penguin! And, when he can finally spend his time in the large outdoor enclosure, he will find his wild side again (they always do). But, for now, he is dependent on people and being cheerful about it is a great way to cope with being in such a strange situation."

A huge THANK YOU to Penguin Rehab Release for your amazing care of Arthur with valued support from Animal Rescue Cooperative.