Importance of Devils in keeping feral cats in check

New research provides evidence that Tasmanian Devils play a very significant role in keeping feral cat numbers in check, and in turn protect smaller mammals from the types of extinctions that have occurred on the mainland. 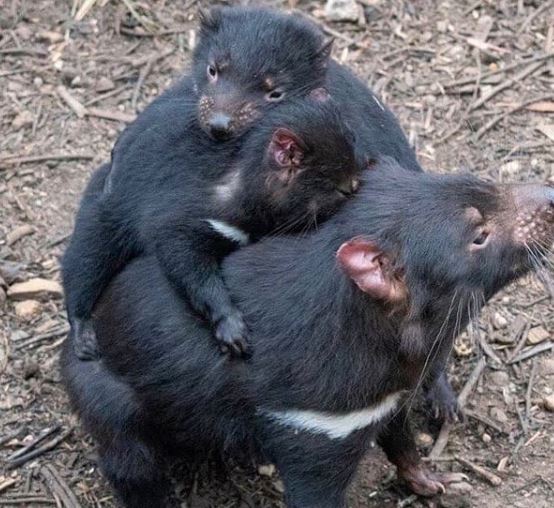 The Tasmanian Devil is playing the role of the apex predator here, and the ecological term for an apex predator causing a series of direct and indirect impacts that ‘trickle down’ through an ecosystem is trophic cascade. Many had suspected that Tasmanian Devils were able to influence feral cat behaviour, but this new evidence makes for a much stronger case.

However, with Devil populations in decline, feral cats are on the rise.

University of Tasmania researcher Calum Cunningham has been studying the broader effects on the ecosystem as the marsupial's numbers declined.

The devils' natural pest management was also found to benefit small prey like bandicoots. The study, published in Ecology Letters, monitored areas in Tasmania that had seen devil populations decline to varying degrees.

"We were able to run statistical models that estimated the abundance of feral cats at a given site."

The models showed a significant decline in feral cats where devils were present.

"We found that bandicoots were only abundant at sites where cats were rare," Mr Cunningham said, adding that devils mostly ate larger animals like wallabies and pademelons that were already dead or older and sick.

It has also been hypothesised that the small number of foxes in Tasmania is due to the presense of devils. The research shows devils also reduced the abundance of possums and wallabies.

"Farmers in particular have problems with this, so that's another service the devils could be providing to the ecosystem. But the community has to want it as well."

The study on apex predators also looked at the impact that a lack of devils had on possums and wombats on Maria Island. Without an apex predator, the possums spent more time foraging for food on the ground. When devils were released into the wild, the possums returned to the trees, and wombats increased day-time activity to avoid interacting with the devils at night.

This article from ABC News explains the new study nicely, with some further reading from Mark Bachmann at the Nature Glenelg Trust