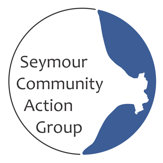 The Seymour Community Action Group was formed in the mid 1980’s. It has continued as a loose association of concerned residents and land owners since. The Group was incorporated in December 2016. Early tasks included stabilising and restoring a sand blow over most of Long Point, for which R & M James received a certificate at the Tasmanian Landcare awards in 1991 for work and were also one of four finalists at the 2001 National Landcare awards. Further tasks were trapping feral cats that were in plague proportions and threatening the native birds and other wildlife. Champ Street was formed from the Old Highway to the Point after consultation with the Council. They agreed to take over the maintenance of the road. In 1990 attempts to drain swamp land for further subdivisions was stopped and community input for a new Development Plan was sought by Council. Since then, the Point has developed as a sustainable coastal rural community with a slowly increasing population of people drawn here by the serenity of the area.  Long Point still faces challenges with the spread of gorse, feral cats and dogs on the beaches disturbing the endangered birds.

Find out what makes SCAGI - Seymour Community Action Group Inc. a dedicated Community Group and learn how you can become a friend, member or volunteer today! We’re located in beautiful Seymour - Long Point, Tasmania. Explore our website (http://scagi7215.wixsite.com/scagi) to find out what’s on the agenda at SCAGI - Seymour Community Action Group Inc. and if you like what we are all about please come and work with us. We can’t wait to meet you!

This information is provided for people to contact member groups about their community Landcare activities. Anyone wishing to distribute information generally to groups should contact Landcare Tasmania with their request.