Citizen Science is an established way for people from the public to collect data and assist scientific research.  In these three workshops, participants got to look a little bit closer at their local environment, and collect some valuable data. 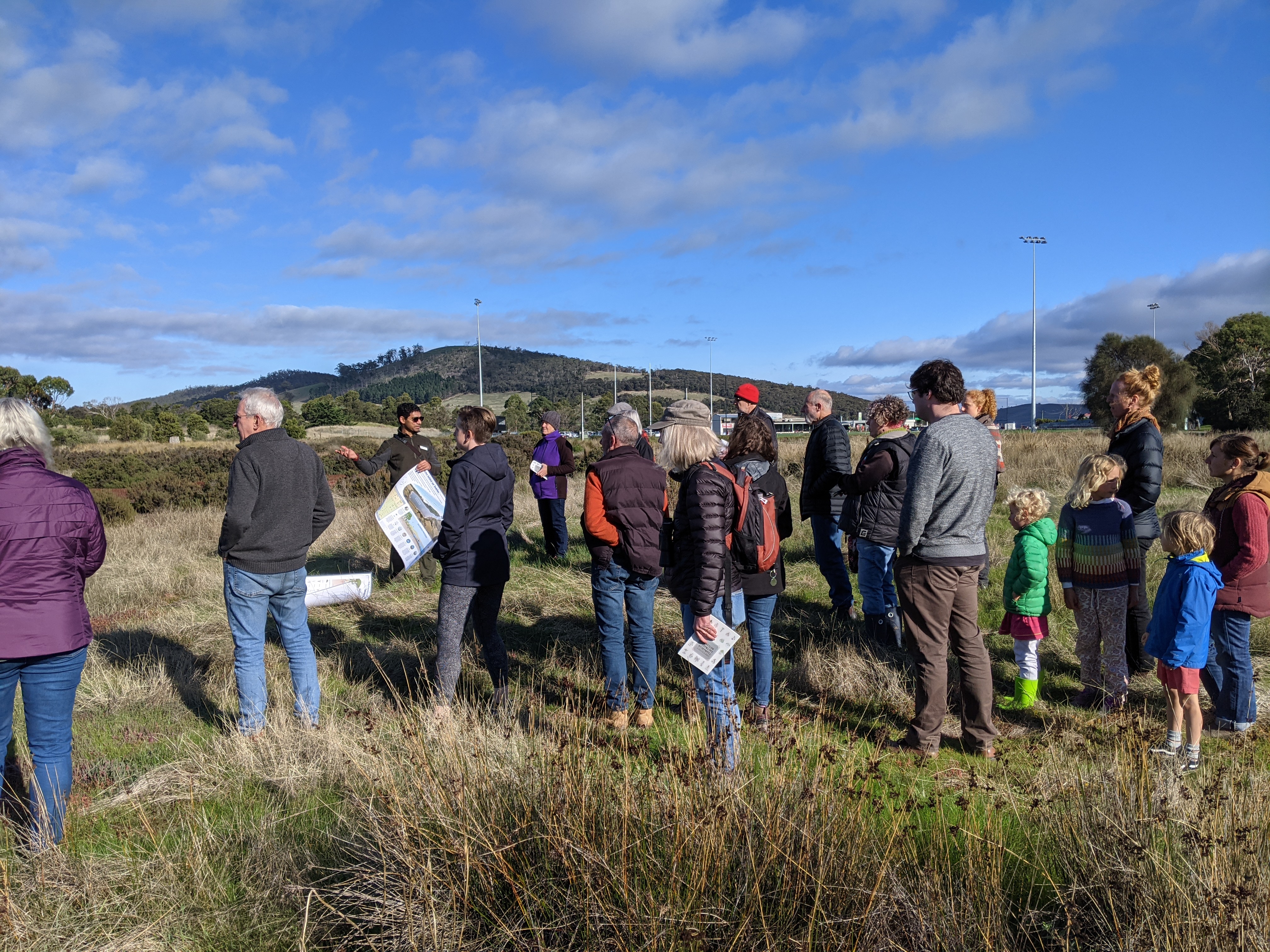 Each workshop began with a chat from Jakob and Joy from Landcare Tasmania, who let everyone know that citizen science is not exclusive (anyone can give it a go!) and it often provides vital information for the protection of threatened species and ecosystems.

Our budding citizen scientists were given an introduction on how to identify animals and plants, and how to use equipment such as remote monitoring cameras and bird recorders.

Citizen science would not be complete with observations alone. It is necessary that observations are made available for scientists and decision making bodies.  In Tasmania, this often means uploading your observations into databases such as the Natural Values Atlas. 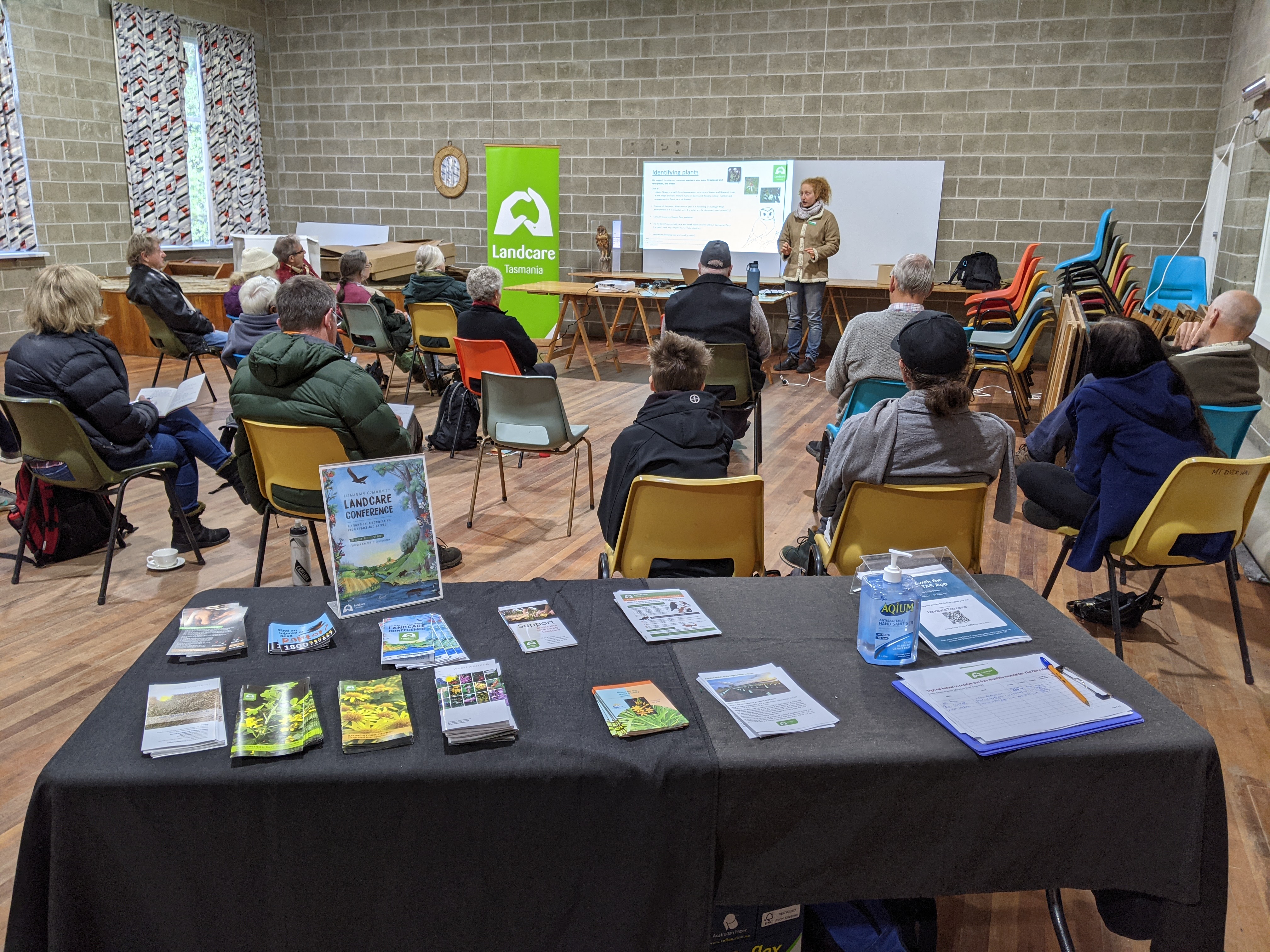 Jakob and Joy spent some time explaining how this can be done - hint: use the iNaturalist app!  It is a community-based program for identifying animals and plants, and the data is forwarded into the Natural Values Atlas.

Then, workshoppers got to hear from their specialist... 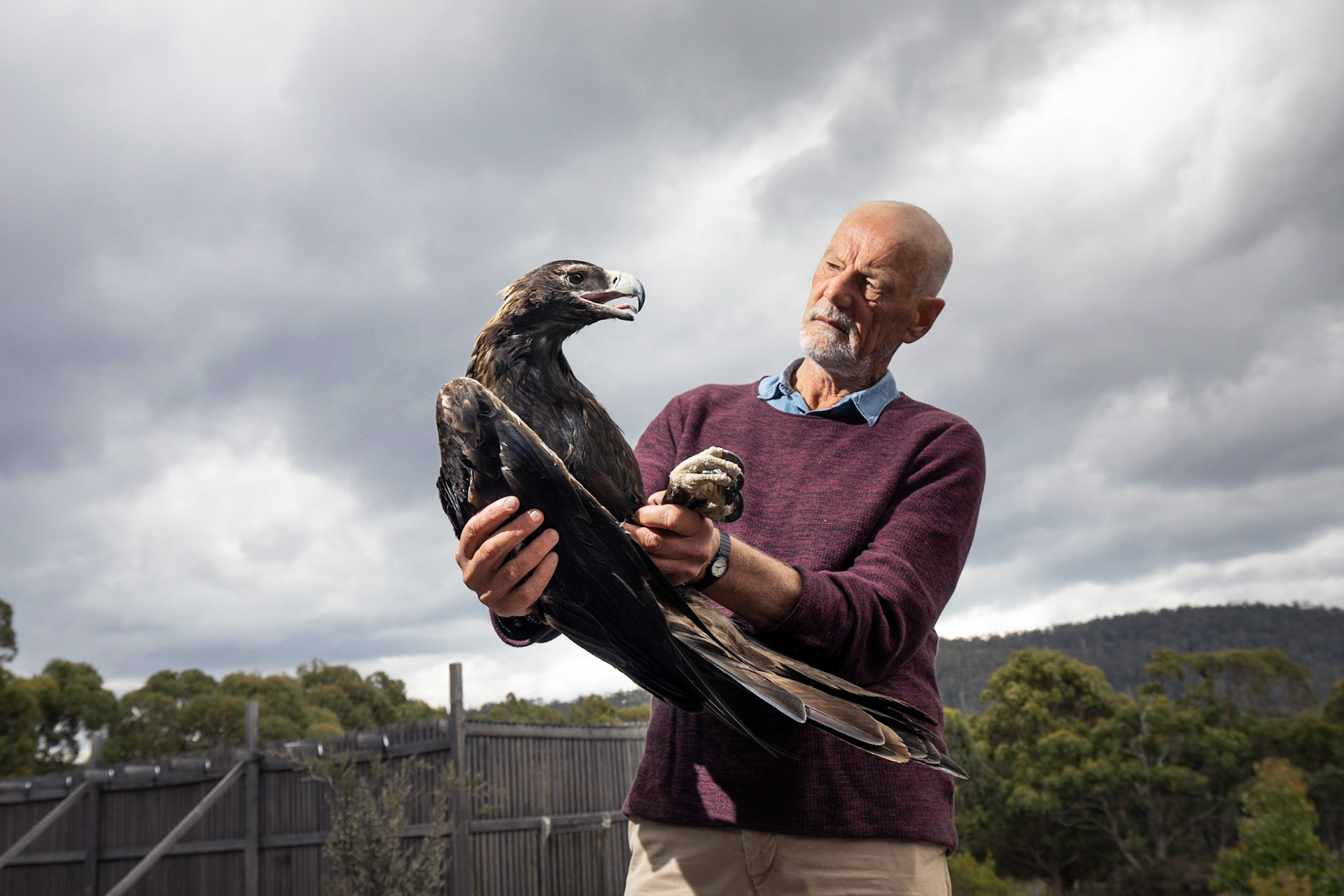 Nick Mooney, for more than 40 years Nick has studied the impact on wildlife of changes in landscapes and peoples’ attitudes. Particular focus has been on trying to accommodate birds of prey and he has often been a leader in studying and managing emerging threats such as Devil facial Tumour Disease.

Nick is volunteer for devil and raptor management, a consultant on various threatening processes and works as a wildlife tourism guide. Nick was a founding member of the BirdLife Australia Raptor Group and sits on the Save The Tasmanian Devil program’s steering committee and WildCares Gift Fund board, is an honorary curator at the Tasmanian Museum and Art Gallery and the technical advisor for the Raptor Refuge.  He was also the Keynote Speaker for Landcare Tasmania's Rodenticide Awareness Week!

Nick started as a young boy who would catch raptors to keep them as pets, but soon moved into protecting rather than keeping them. He now spends an incredible amount of time conducting raptor surveys all across Tasmania. 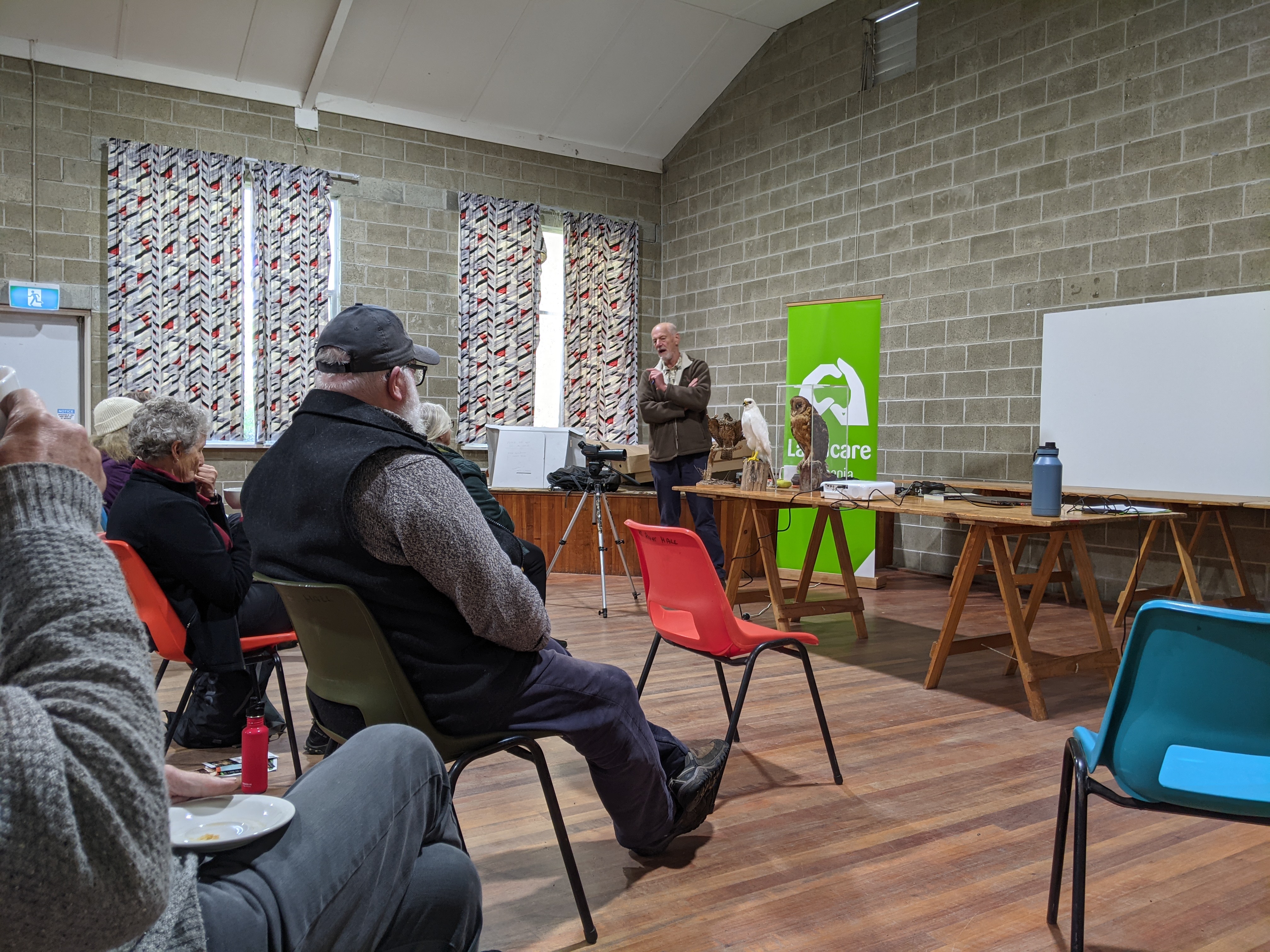 Nick shared many invaluable tips and tricks for observing animals, learnt over decades of doing this work. Nick is an absolute legend and it was an incredible opportunity to learn from him. 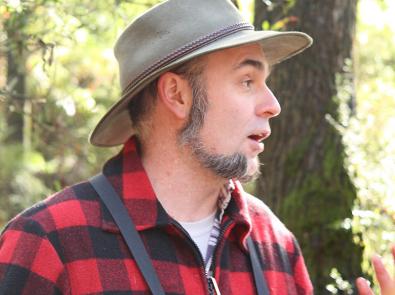 John Gooderham from the Waterbug Company introduced us to the realm of waterbugs. Living in rivers and creeks, they are often overlooked - but extremely important.

John Gooderham is a freshwater ecologist.  He works with The National Waterbug Blitz. He co-authored The Waterbug Book with Edward Tsyrlin (CSIRO 2002), The Waterbug App with Michael Sharman (a free ID app on iOS and Android!).  He is currently making short waterbug documentaries and helping people set up citizen science projects to monitor rivers and wetlands around Australia – using waterbugs. 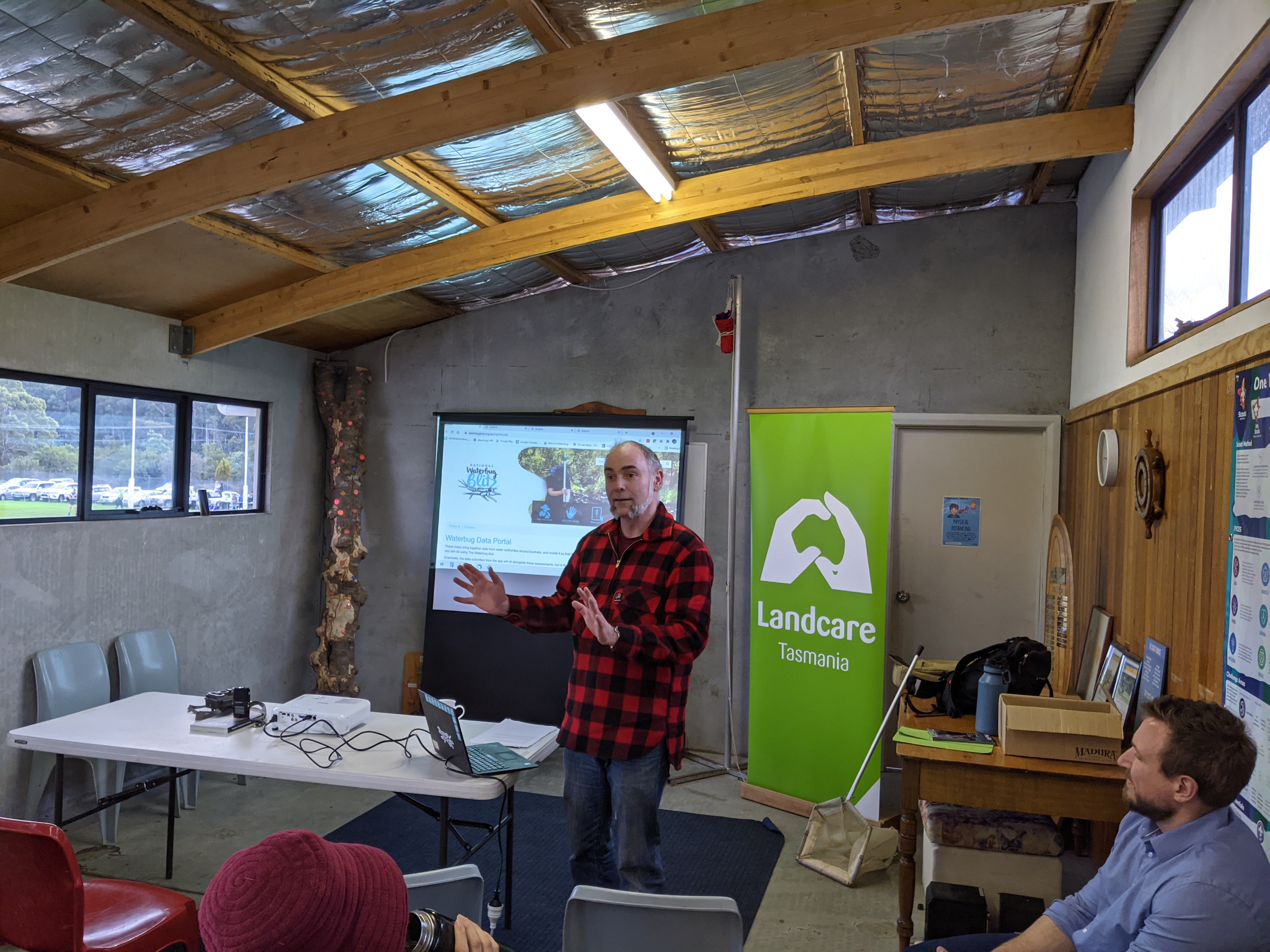 John explained that waterbugs are a brilliant indicator of water quality, and a vital part of ecosystems.  Bad water quality can be identified immediately in certain insects not being present, or only in low numbers.

Conventional water quality testing often does not pick up on time-localised events, for example run-offs that only occur after strong rain.

John brought a couple of buckets with samples from nearby Snug Rivulet, and everyone had heaps of fun identifying the bugs in them (no waterbugs were harmed during the workshop, and all were released again after).

If you are interested in testing the water quality of your local creek, then you can download the Waterbug App for free, and conduct and easy survey!

Our expert, saltmarsh virtuoso Dr Vishnu Prahalad shared some of the extensive knowledge he has gained in 14 years of working with the surrounding saltmarshes.

Dr Vishnu Prahalad is a Lecturer at Geography, Planning, & Spatial Sciences, University of Tasmania. He has worked on saltmarsh ecology and management in Tasmania for over ten years, closely collaborating with a range of government and non-government agencies and local groups. His publications include ‘a field guide to the plants of Tasmanian saltmarsh wetlands’, atlases for saltmarshes for all three regions of Tasmania, the ‘saltmarsh matters’ citizen science app and several other science communication materials. 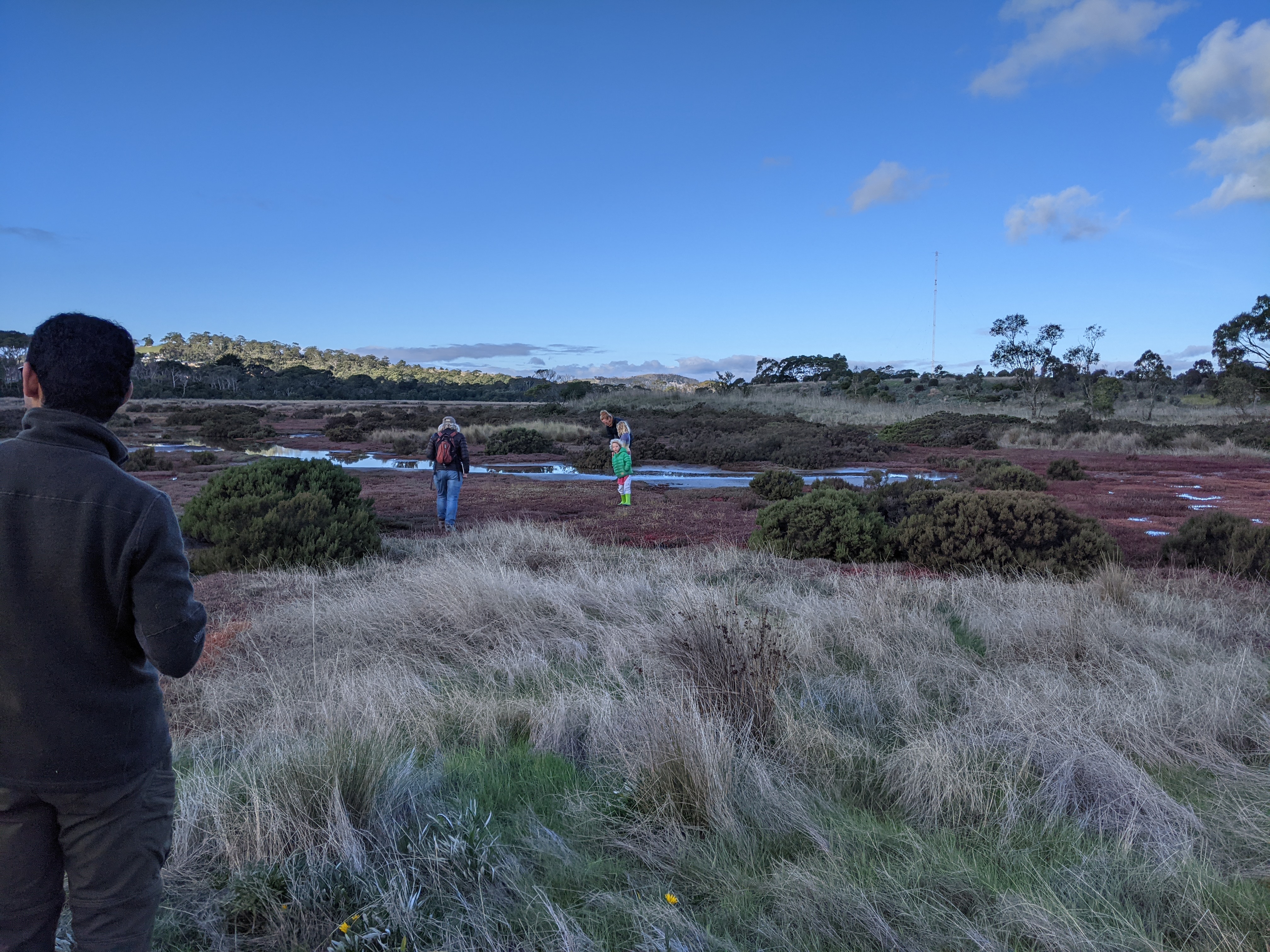 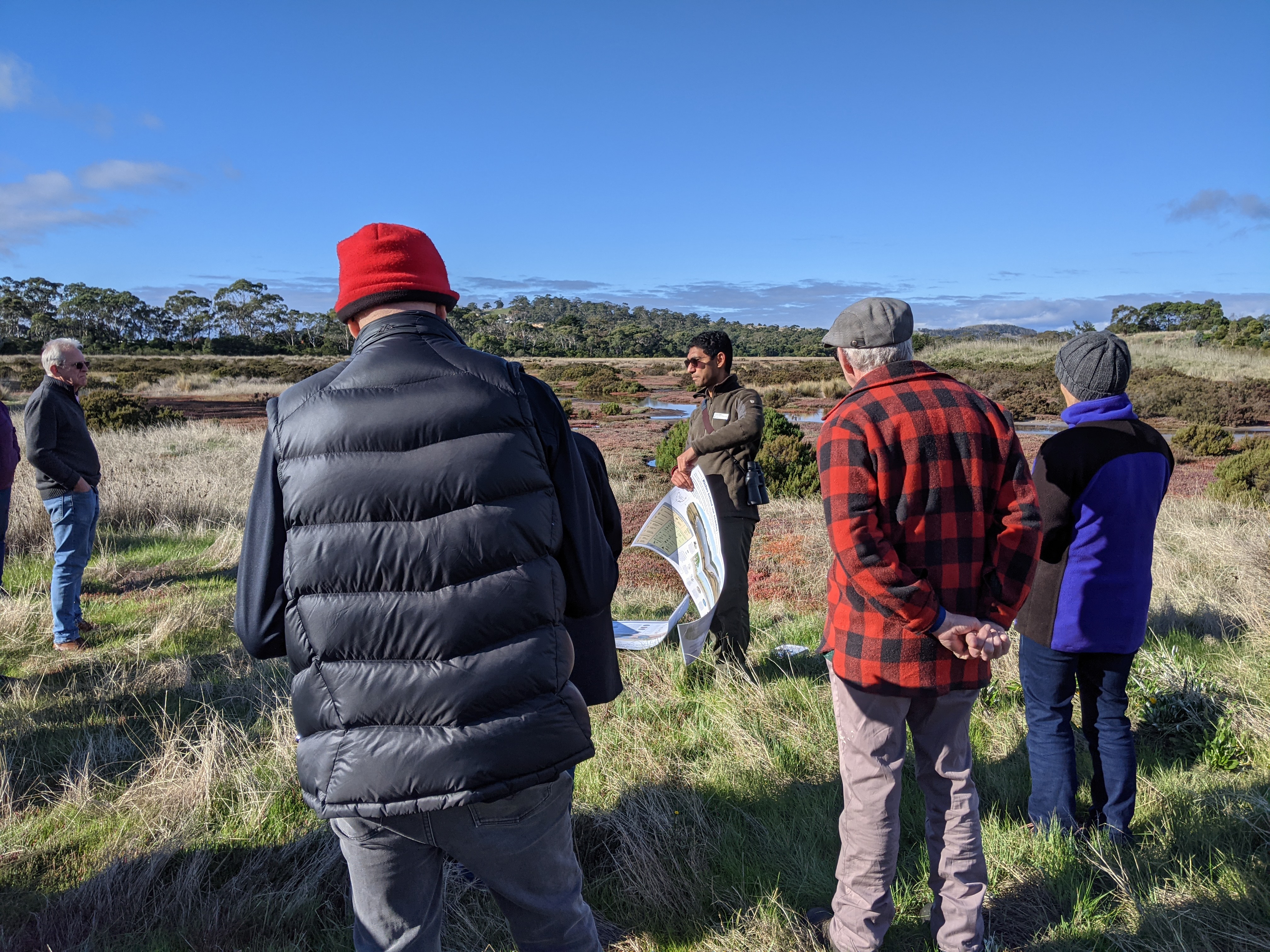 Images: Citizen Scientists in the field with Dr Vishnu!

Vishnu stressed the importance of these low-lying areas that are regularly flooded by the tides is mostly overlooked by the public, and a lot of them have already been lost to developments.  Yet, they are crucial as a 'nursery' for juvenile fish and habitat for birds.  They also filter the waters and continuously take up carbon from the atmosphere.

We also learnt that Aboriginal people and early European settlers would have used saltmarshes as a food source for collecting various herbs.  To finish, our budding CitSci's got to help Vishnu with his research by conducting a bird survey in the area.

This project received grant funding from the Australian Government’s Communities Environment Program with the support from MP Julie Collins, and from the JM Roberts Charitable Trust through the Tasmanian Landcare Fund.
Our members are strongly supported by Kingborough Council.

These three workshops are just the beginning of a much larger program to follow across the state.  If you are interested in citizen science or have suggestions for local issues that we can address, then please get in touch.