What. a. week. The impact of rodenticides on native wildlife was truly a talking point this Rodenticide Awareness Week.

Evening sessions were a hoot 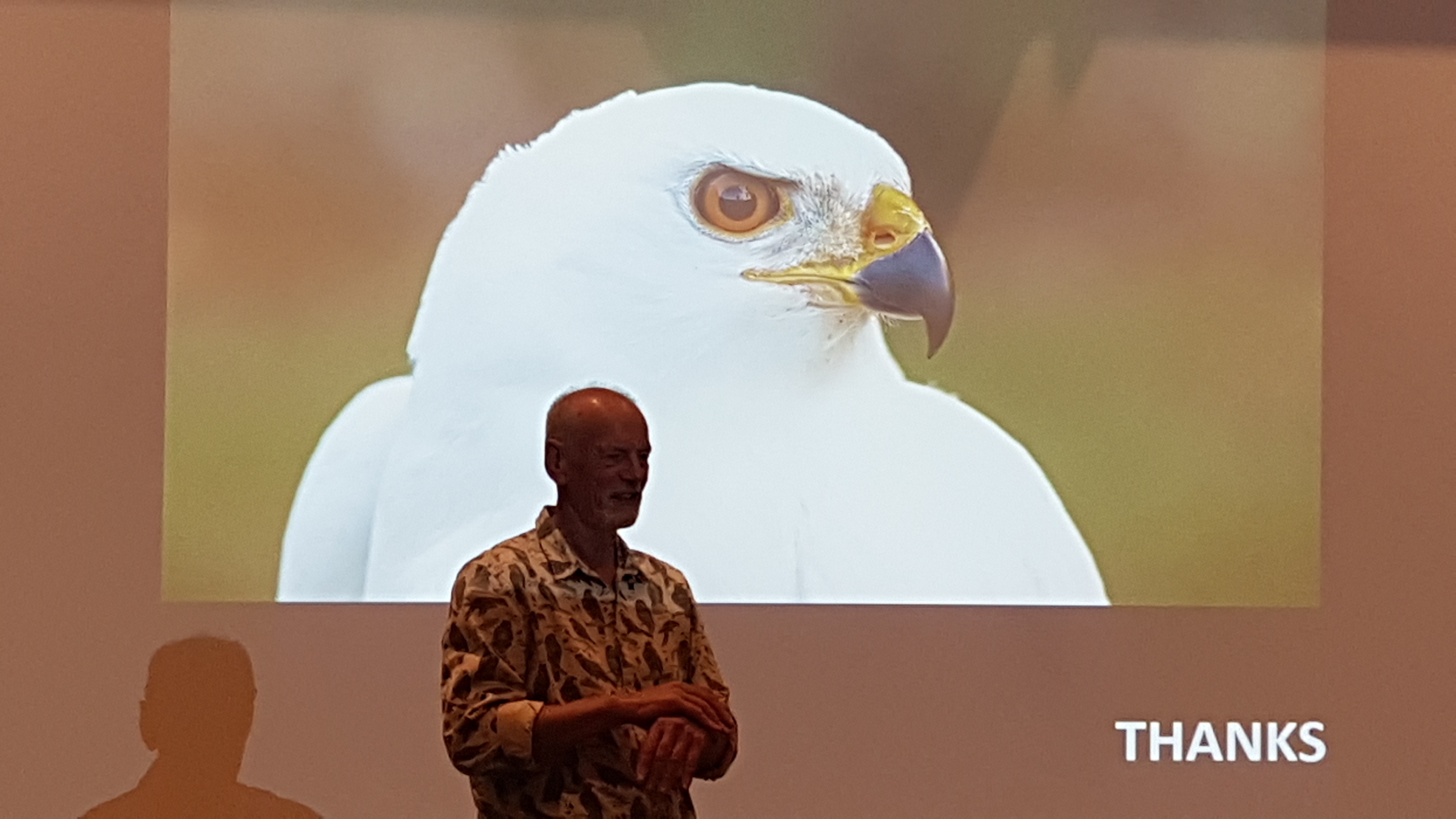 Nick explained how second generation rodent poisons are making native predators sick and are causing deaths. This is caused by bits of rodent poison sitting in the stomach and being stored the tissues of the rat or mouse when the poison has already killed it; and so whatever eats that mouse will also eat all that poison too! 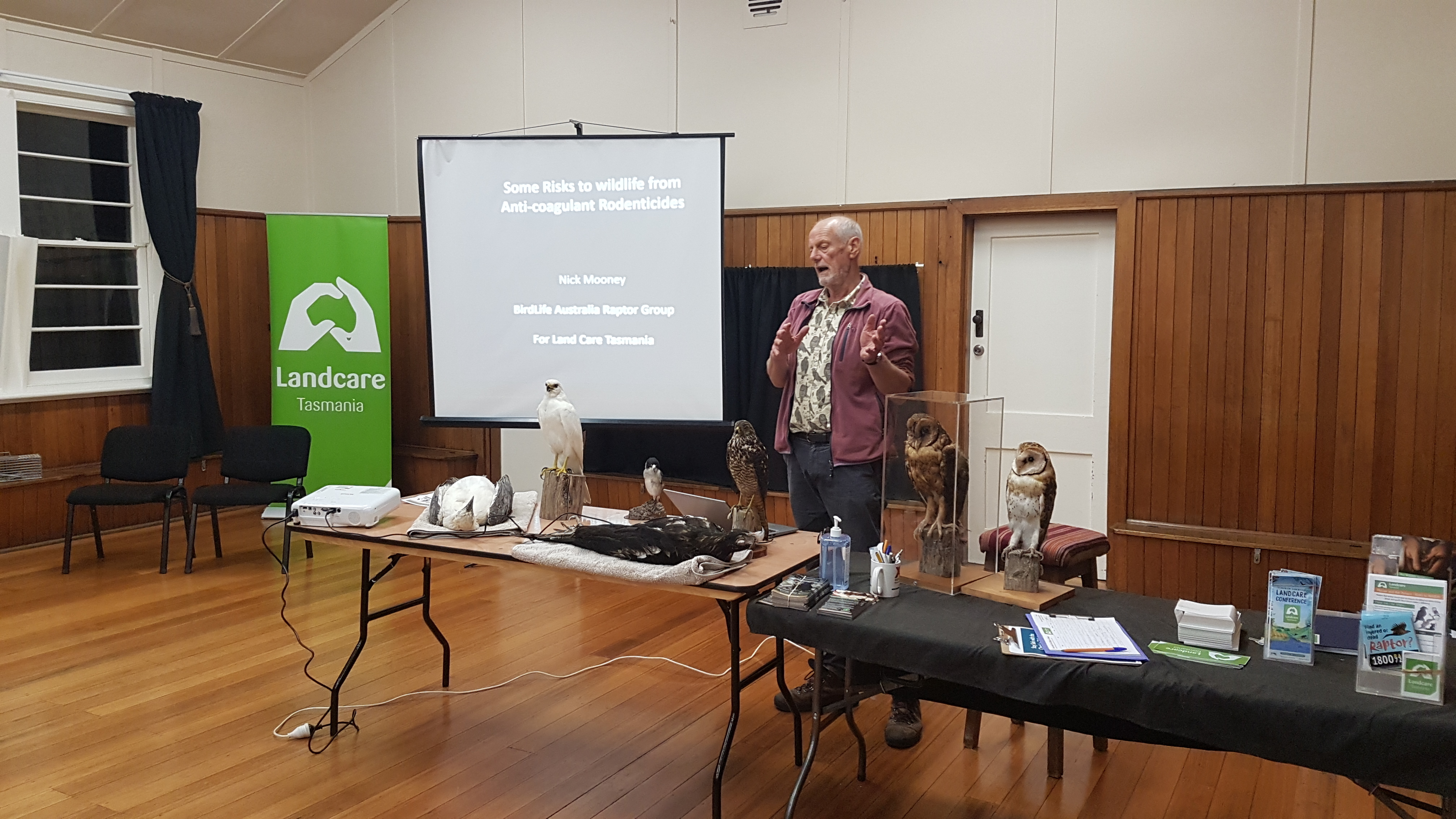 There are many alternatives to these really harmful rat and mouse poisons. These include first generation rodent poisons, rodenticides based on salt (sodium chloride, NaCl), and many different kinds of manual traps. See our webpage for more information, and here is a flyer with a summary of key points. 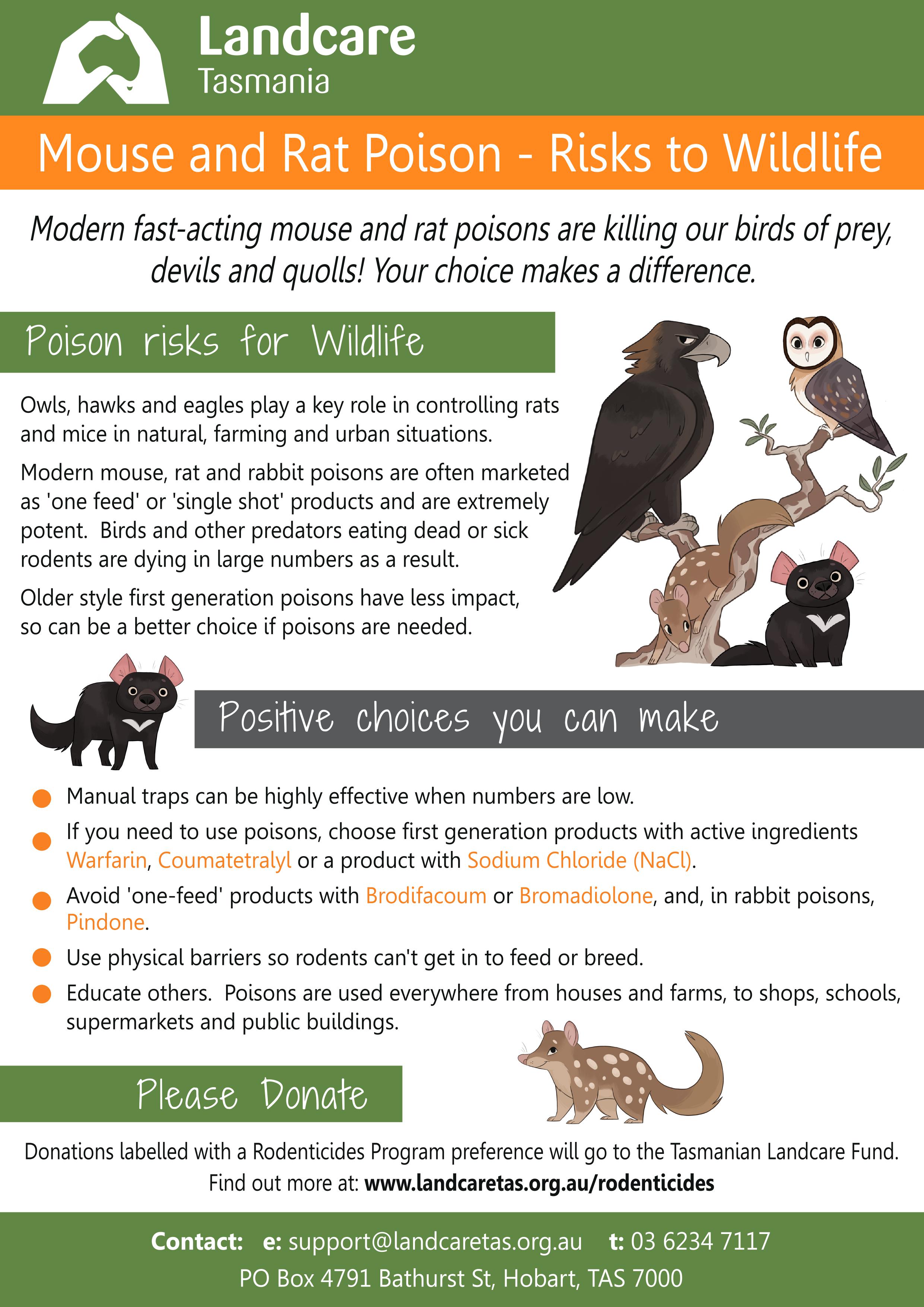 A Q&A session was also a part of the evening. It was really engaging, with lots of questions and discussion between panellists and the audience. Two vets from Bonorong, Luke Gregory and Alex Kreiss, were panellist for the Q&A sessions, and provided very interesting insights on the issue. 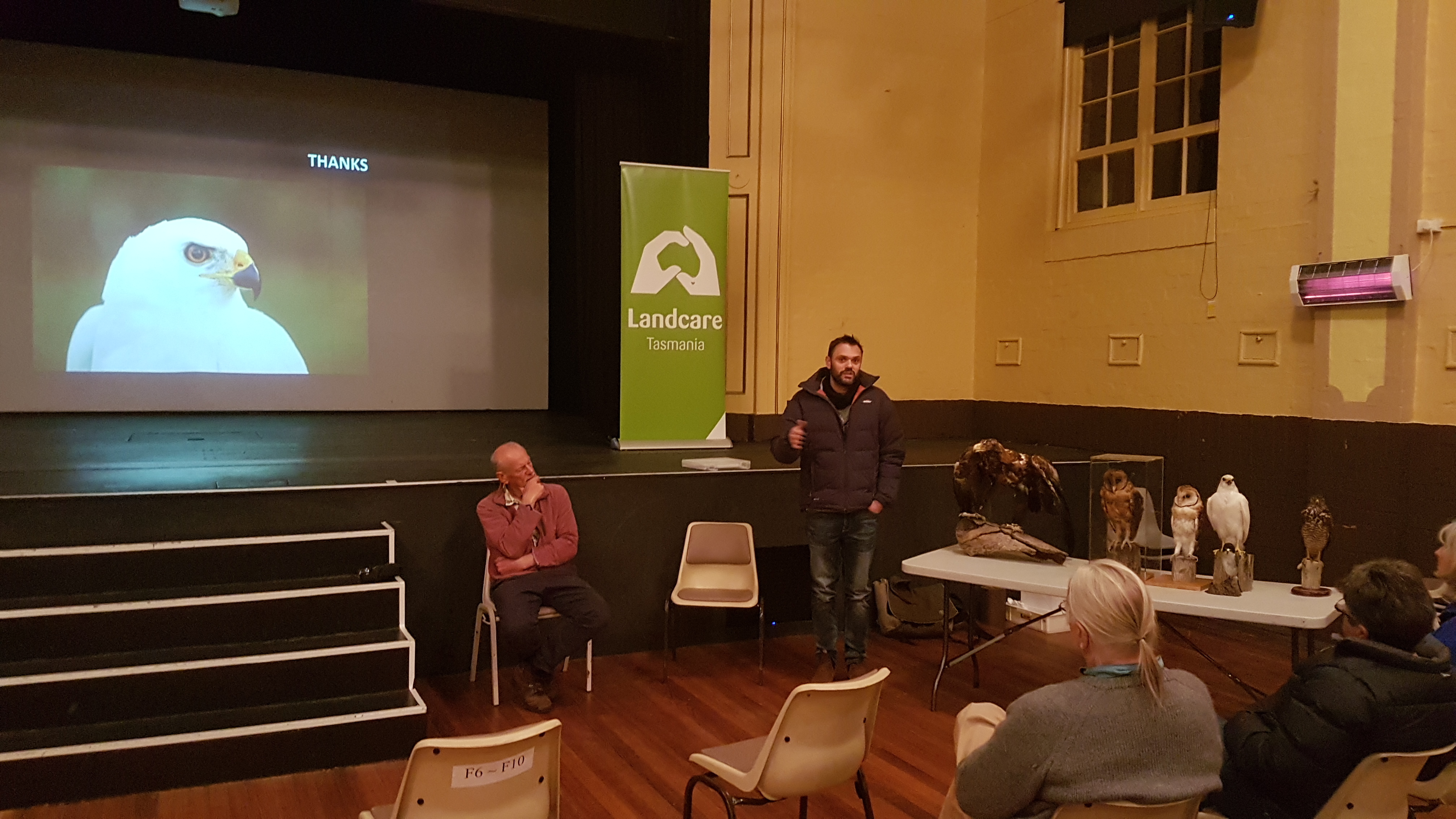 The info sessions were attended by a broad audience, including members of the public, councillors and council staff, Landcare members, and suppliers.

These info sessions are a part of our greater rodent poison awareness program, and we will be using these sessions to build momentum to take further action on this concerning issue. 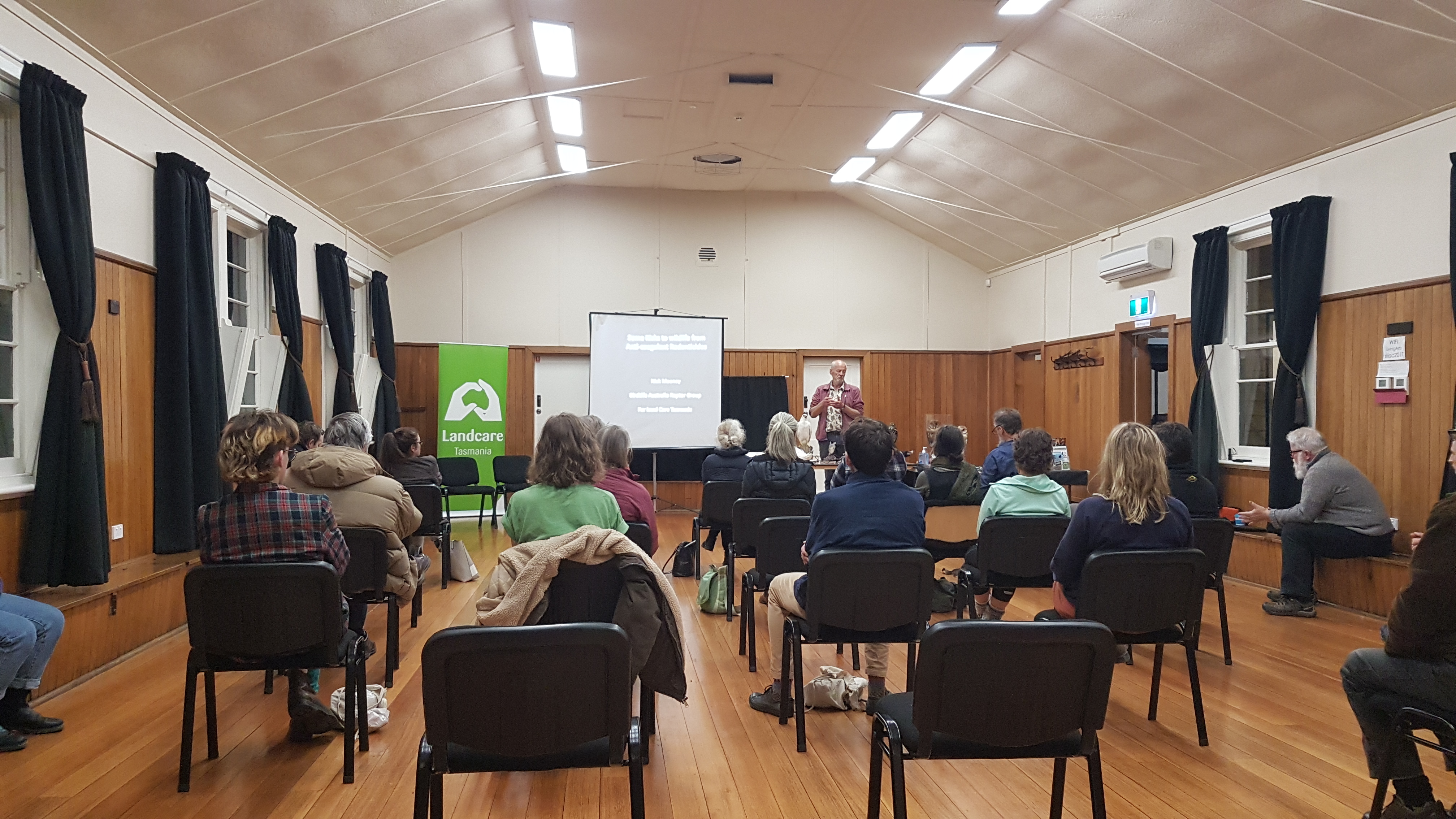 Our Rodenticide Awareness Week Keynote Speaker Nick Mooney has contributed to a recently published paper which looks at the impacts of rodenticides on Tasmanian wedge-tailed eagles.

This paper examines the impact of anti-coagulant rodenticides [AR] on the endangered Tasmanian wedge-tailed eagle.  It is the first systematic study of AR exposure in an Australian top predator.

The researchers detected anti-coagulant rodenticides in 74% of the eagles they collected.

Those eagles residing in closer proximity to agriculture and human populations were found to have higher levels of the poison present.

These results bring attention to what has previously been an unrecognised threat to Tasmanian wedge-tailed eagles, and further strengthens the need to address the issue of second-hand poisoning from anti-coagulants.

Nick Mooney spoke with Mel Bush on ABC Radio Hobart.  He explains that the impact of widespread use of rat poisons on our wildlife is much bigger than we thought.

"We just published a paper analysing a whole lot of dead eagles. We found about 3/4s of the wedge-tailed eagles had very high levels of anti-coagulant rodenticides in them"

Listen to the full interview where Mel and Nick talk about the impacts of rodenticides on raptors, the types of poisons which are harmful, and the value of birds of prey in our ecosystems.

Don't Eat That Rat! In The Hobart Magazine 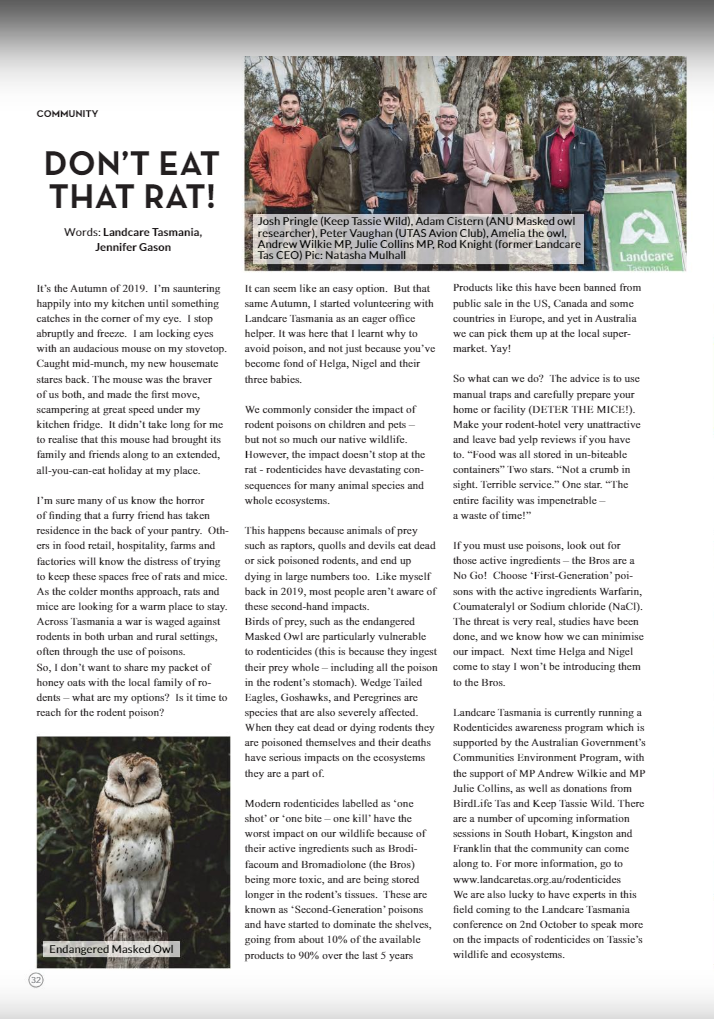 Image: Article in The Hobart Magazine, 'Don't Eat that Rat!'

Our writer Jenn shared her story dealing with a rodent problem in her home.  "It didn't take long for me to realise that this mouse had brought its family and friends along to an extended, all-you-can-eat holiday at my place" she writes. "Is it time to reach for the rodent poison?"

The article shares some key information about the impacts of rodenticides and how we can reduce the harm done to native wildlife.

The mouse plague - mainlanders desperate to reach for tough poisons

Mainland Australia has been hit with a devastating mouse plague, making rodenticide awareness more important than ever.

The New South Wales government has applied for "urgent approval" to use bromadiolone on farms to deal with the mouse plague, ABC reports.

"Dr Watson said bromadiolone was a highly lethal second-generation poison that could easily cause secondary poisoning in animals, including farm animals such as cattle and working dogs"

"She said double strength zinc phosphide was the best option as it was much less likely to kill unintended wildlife, including birds of prey" the ABC report.

Read more about the NSW state government's plea for use of bromadiolone on farms.

Read more about the mouse plague from the CSIRO.