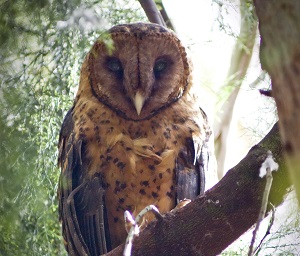 At particular times of the year, we wage war on rodents across Tasmania's landscape in both urban and rural settings, often through the use of poisons.

For some time we at Landcare Tasmania, plus a number of our members, have been concerned about the impact these poisons are having on our wildlife.

Background   What Can I Do?  What is Landcare Tas Doing?

The threat is very real and some poisons have a greater impact than others. Wildlife specialist Nick Mooney has presented at a number of awareness raising info sessions run for groups around the state and his review paper was published in Tasmanian Bird Report Volume 38, July 2017 (Birdlife Tasmania). 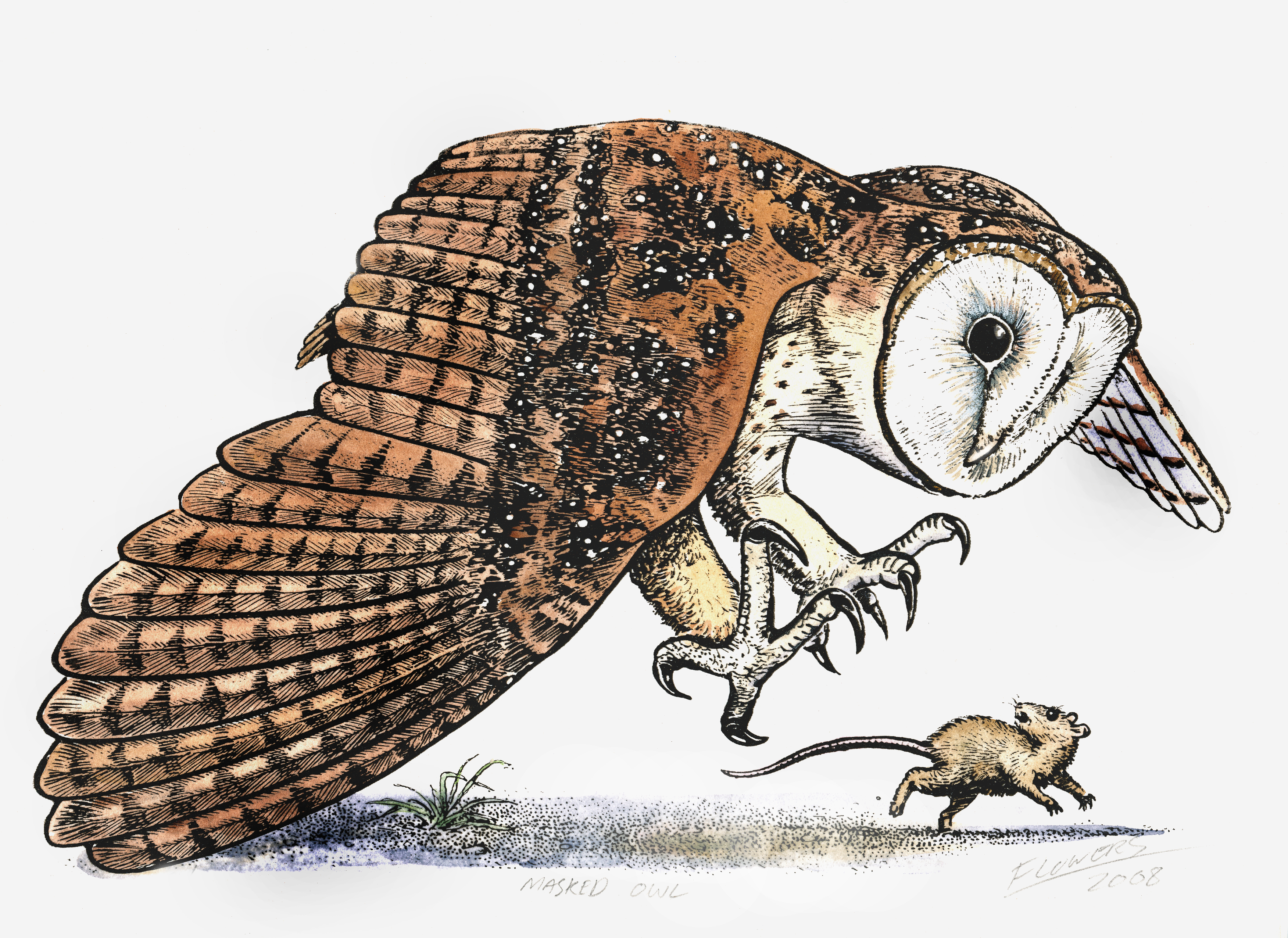 Birds of prey, such as the endangered Masked Owl (see images), are particularly vulnerable to rodenticides.  When they eat dead or dying rodents they are poisoned themselves. Other predators and scavengers like quolls and devils are also at risk of secondary poisoning. But there are ways to minimise our impact.

Landcare Tasmania is running a program to raise awareness of the positive choices that communities and businesses can make to reduce the impact of rodenticide poisons on raptors.

Please consider donating to our program. Your donations will go towards developing educational materials, and towards engaging with people across the whole community to raise awareness of the positive choices everyone can make.

Donate to the Program

What Can I Do?

Controlling introduced rats and mice is a necessity for many of us, whether on farms, in the bush or in town. However there are several things you can do to limit the impact on our wildlife. For most people using a combination of the methods described below will give the best results. 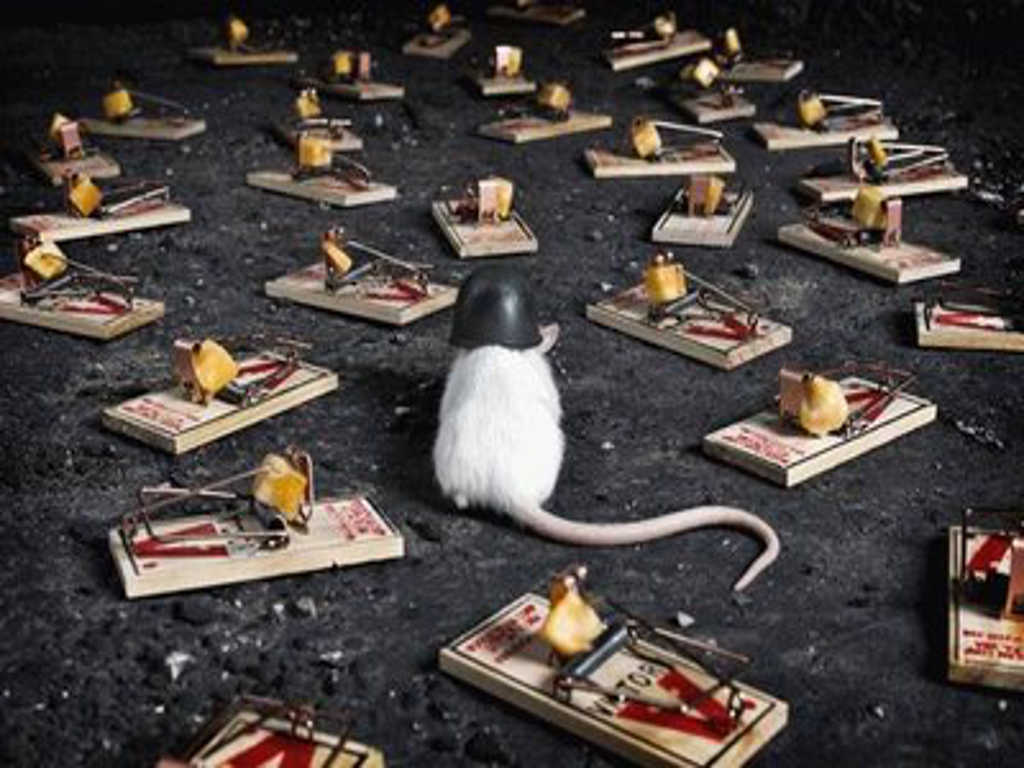 The old style mice and rat traps, live cage traps, plus some of their newer types like electric traps, still have a role to play in controlling rodent populations, particularly when not in large numbers.  Such mechanical or electric deaths are safe for scavengers or predators because there are no poisons to pass on.

Most rodenticides (poisons designed to kill rats and mice) are based on anticoagulants chemicals that kill by promoting uncontrolled internal bleeding. Older types of anticoagulants, called First Generation Anticoagulant Rodenticides (FGARs), require rodents to take multiple doses and therefore kill more slowly but have less effect on animals that eat poisoned rodents. More recently developed Second Generation Anticoagulant Rodenticides (SGARs) are used much more widely mainly because of the convenience of their “single dose” effect. They kill rats and mice more quickly but more residual poison is ingested by raptors or other scavengers/predators and so can significantly affect local populations. When using rodenticides a choice to use FGARs may well make the difference for your local raptors.

"But how do I know which is which?"

Fortunately, most SGARs are clearly labelled as POISON, and usually include the words “single dose action”. You can check the label for the active ingredients.

Remember: No poison is completely safe, so use poison as a last resort. 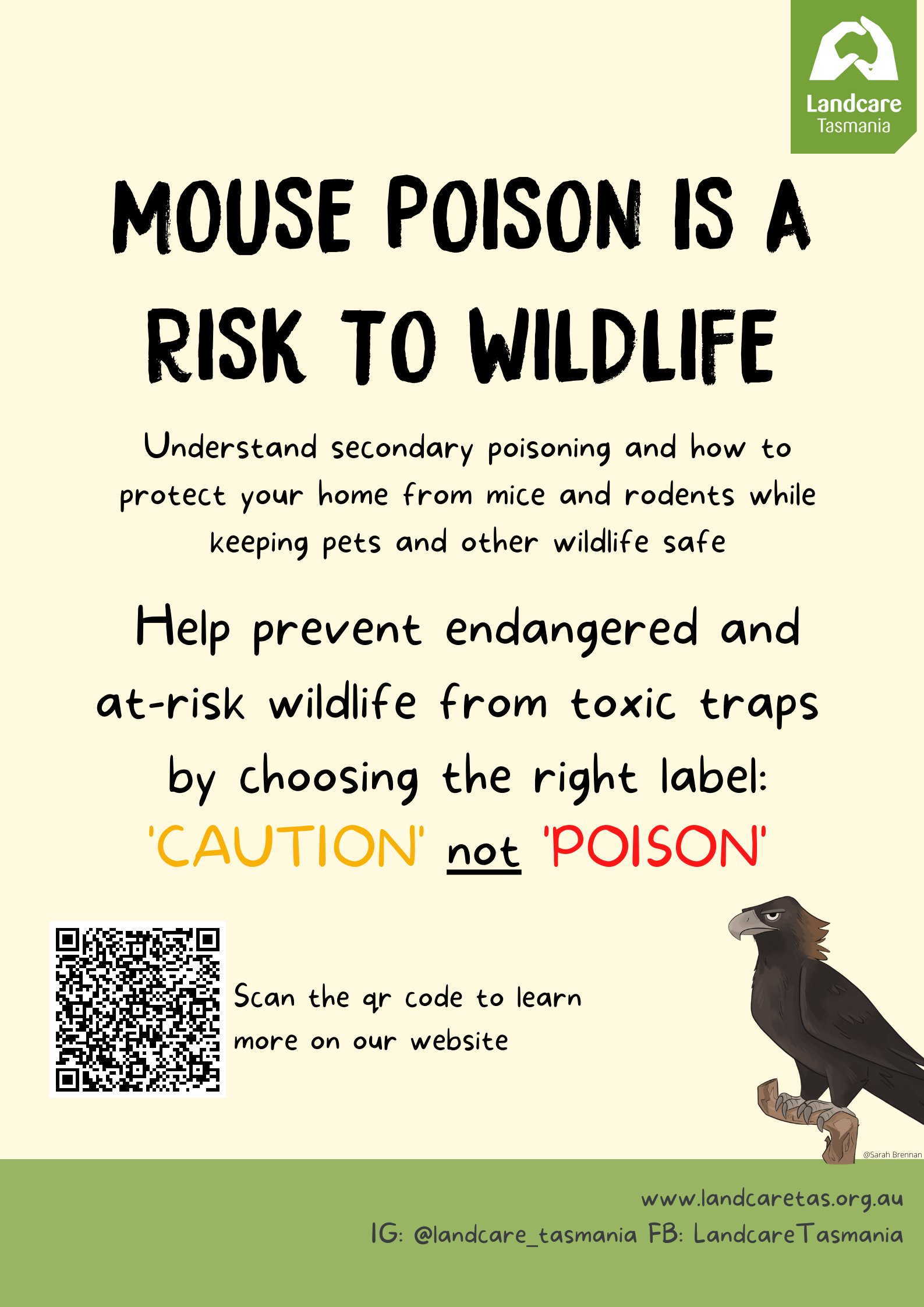 How you physically prepare your property can make a difference to whether rats and mice will come in looking for food. Properly sealing houses and buildings so as to restrict entry is particularly effective, though can be difficult to achieve. Restricting the availability of food is also important, for example using rat and mice-proof compost heaps and using chicken feeders that are designed only to release food in quantities needed to feed your chickens.

And remember that others may not even know their impact; from shopping centres to your neighbours, if you are trying to protect habitat you need to get others on board, so don't forget to ask and look at the alternatives.

Have a look at Nick Mooney's review paper HERE

Check out Healthy Wildlife, Healthy Lives for a bit more detail and links to other studies.

What is Landcare Tas Doing?

Since 2018 Landcare Tasmania been attending events and festivals across the state to promote community awareness of these issues. 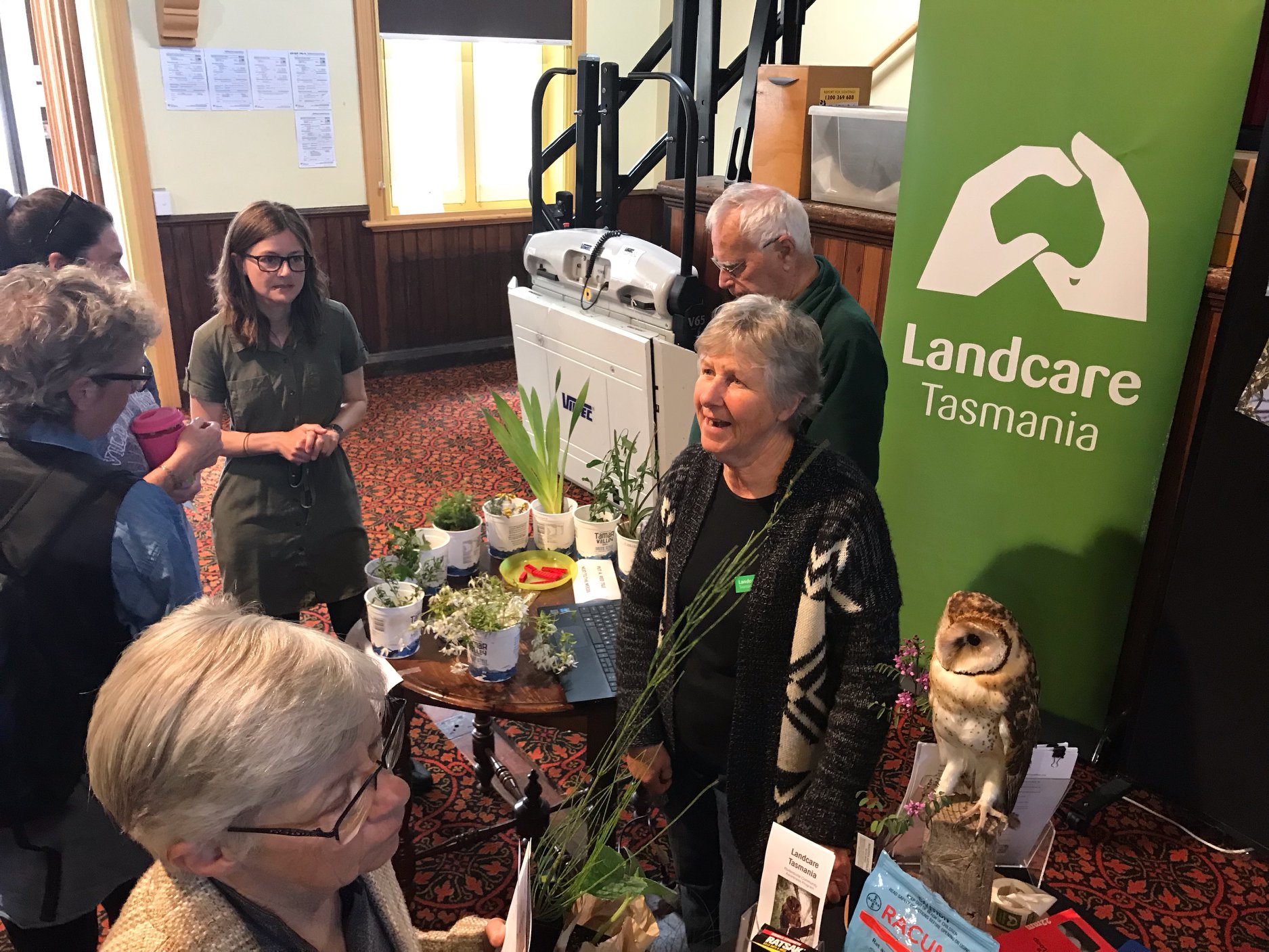 Donations from Birdlife Tas and Keep Tassie Wild have helped us produce flyers, and funding from the Communities Environment Program in the Clark and Franklin Electorates have boosted our capacity to run information sessions and help our groups with targeted on-ground activities.

Landcare Tasmania has formed a Rodenticides Working Group which include experts in the field along with members and volunteers from our Members Council and Board. In July 2020 the working group made a submission to the regulators on future use of anticoagulant rodenticides.

See the official Launch of the Rodenticides Community Awareness Program 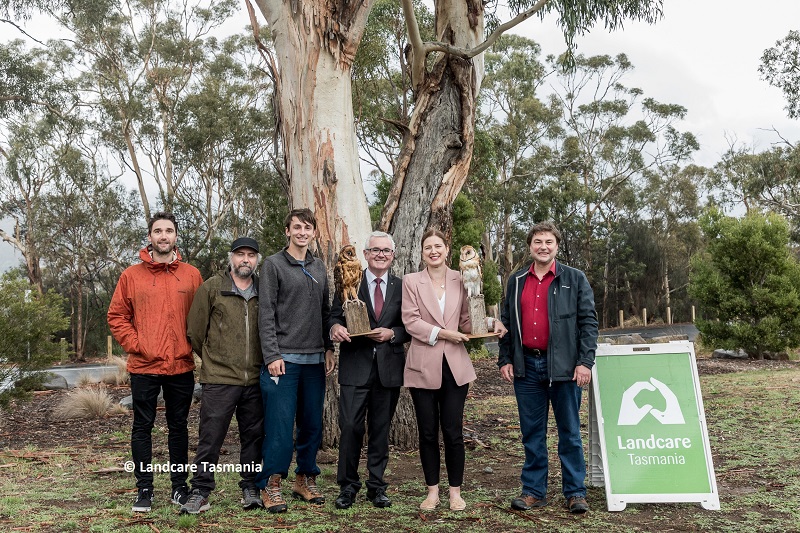 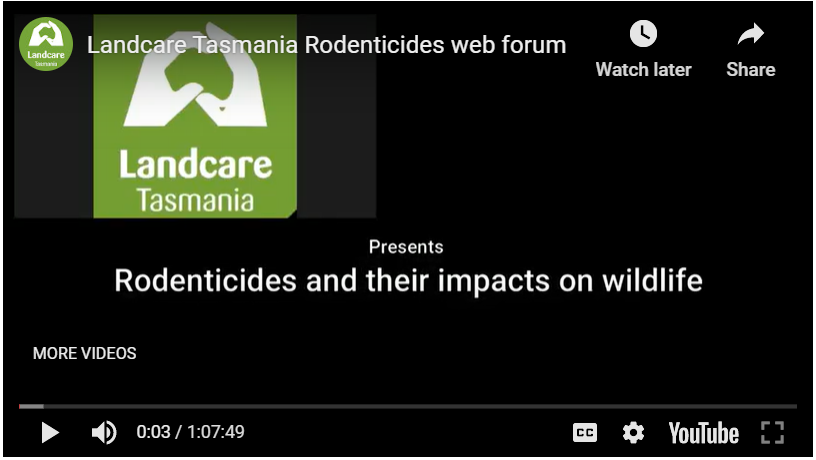 Read about the first community planting days of our Communities Environment Program funding in Glenlusk (Clark) and Acton Park (Franklin). 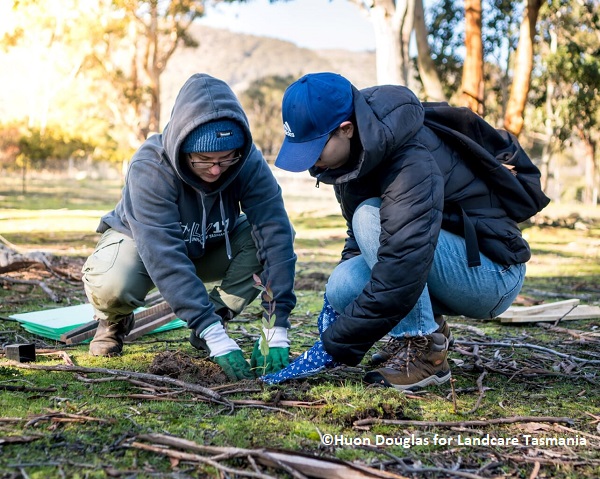 Momentum is growing! Read about media coverage on Rodenticides issues, and our community awareness-raising events 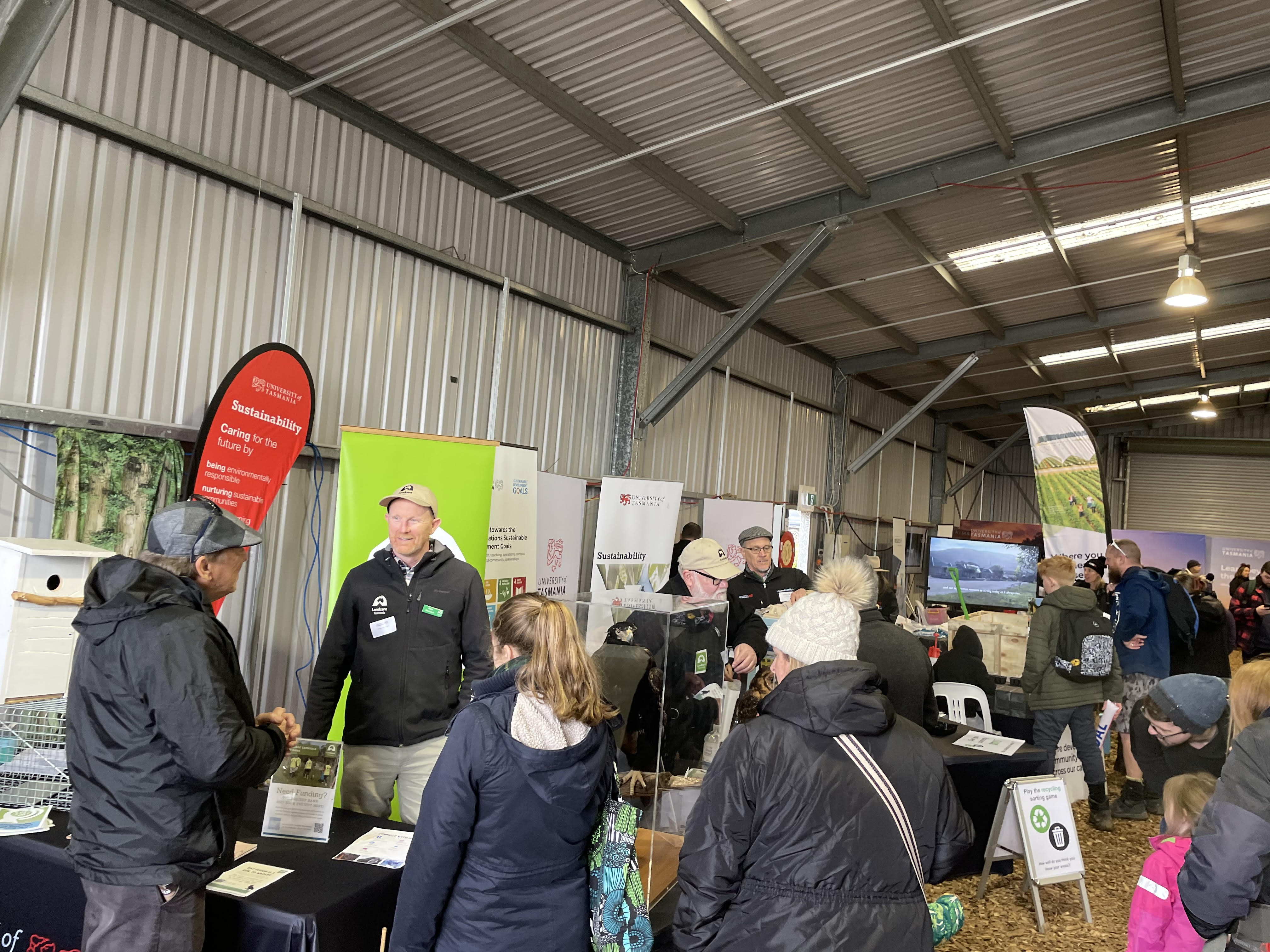 Spreading the word at Ag Fest 2022

Our Submission to the APVMA Chemical Review of Anticoagulant Rodenticides

The Australian Pesticides and Veterinary Medicines Authority are reviewing the approvals and registrations of anticoagulant rodenticides (AR) because of concerns on environmental safety, secondary poisonings, human health, and impacts of residues on livestock and wildlife.  Landcare Tasmania have made a submission highlighting our concern of the severe impacts of secondary poisoning from anticoagulant rodenticides on our native birds of prey who eat poisoned mice and rats.

Given the substantive evidence of the negative impacts of ARs on wildlife, coupled with the ease at which ARs can be accessed by the general public and the fact that ARs are bioaccumulative ARs pose a serious, immediate and existential risk to birds of prey, other apex predators and scavengers especially those with large foraging ranges including the Eastern and Spotted-tailed quolls and Tasmanian devils and throughout the food web of Tasmania’s fauna.

Our submission advises that:

Second Generation Anticoagulant Rodenticides (SGARS)
i. Ban their use by, and the sale to, the general public
ii. Approval for use given only to certified practitioners, who may only use SGARs in
specific circumstances. We recommend following the regulations set down by the
Commonwealth Agricultural and Veterinary Chemicals Code Act 1994 in regards to
1080
iii. Users of SGARs must demonstrate effective disposal of morbid and dead animals,
whose cause of malady is SGARs
iv. Only permit application of SGARs in solid, non-pellet form in tamper resistant bait
stations, targeted to rodents only