Landcare in the news!

Avid Landcarers have been attracting attention in the news! Soil First Tasmania have shared some of their soil trial journey in the Tasmanian Country.  The dedicated duo of Bridgewater/Gagebrook Cleanup Group had their community campaign featured in Brighton Community News, and shared their cleanup story with the ABC.  Don Defenderfer, who was was State Coordinator of Landcare Tasmania for many years, welcomes back the Tasmanian Country and expresses the importance of community insight into the life of rural Tassie, and in 'the world of Landcare'! 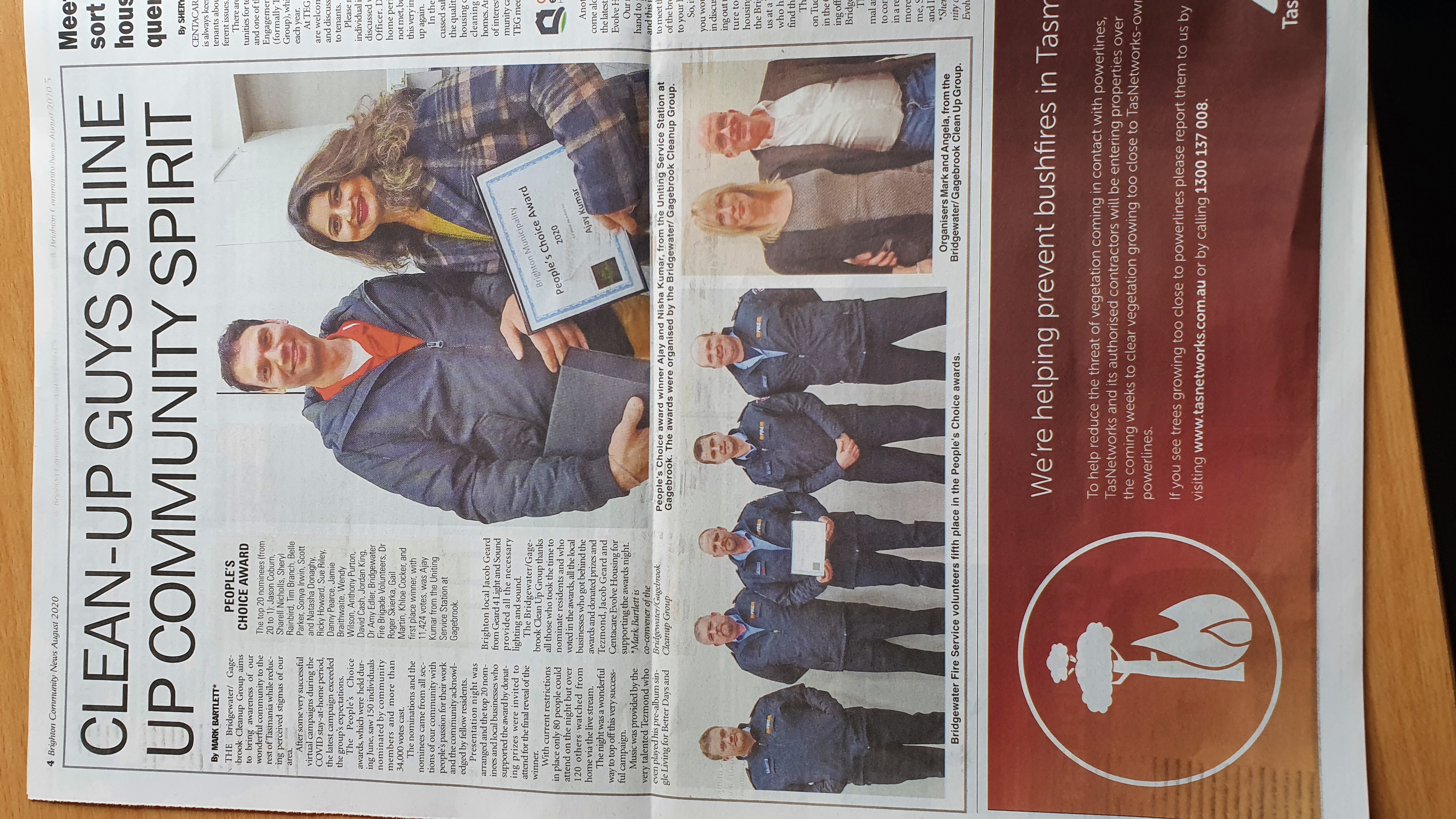 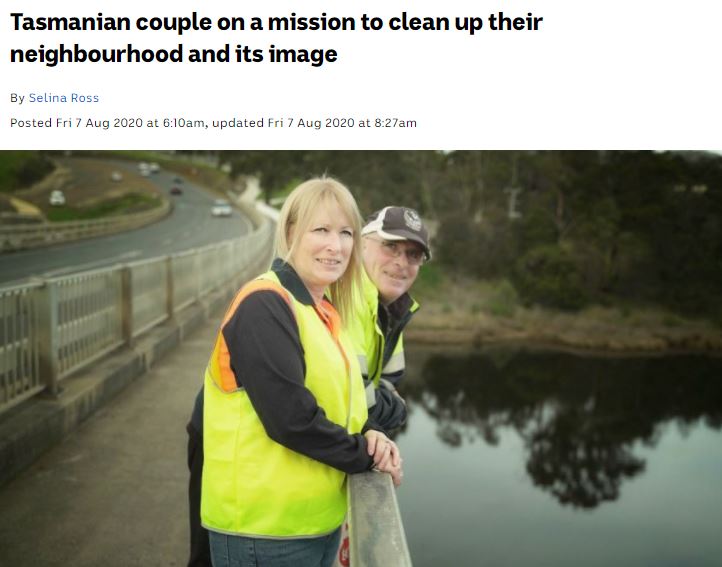 Bridgewater/Gagebrook Cleanup Group were featured in Brighton Community News for their wonderful community building campaign - The People's Choice awards!  The campaign was met with great success - with 150 individuals nominated by the community - and more than 34, 000 votes!

"The Bridgewater/Gagebrook Clean Up Group thanks all those who took the time to nominate residents and who voted in the awards, all the local businesses who got behind the awards and donated prizes and Tezmond, Jacob Geard and Centacare Evolve Housing for supporting the awards night" Mark reports.

This super proactive member group, comprising of just two determined landcarers, Mark Bartlett and Angela Knight work to combat the problem of dumped rubbish in the Bridgewater and Gagebrook neighbourhoods, and to strengthen community and the neighbourhood image.

"Mr Bartlett moved back to the area five years ago and found illegal dumping in bush areas was a major problem." ABC News reports.

"You get to the point where you say, 'I just cant do it anymore'," Mr Bartlett said.

"But we have got a lot of amazing people on our Facebook page and they say 'no worries, we'll give you a hand' and we're back at it again.

"And we keep on doing it until people can see why we're doing it."

"Recycle it, reuse it, don't create so much rubbish to start with, think about what's going to happen to it when you're finished with it because there's just too much going into landfill."

The Bridgewater/Gagebrook Clean Up Group continue to work tirelessly to make the community a cleaner place to live. They hold regular clean up events and work closely with Brighton Council. New members are always welcome! 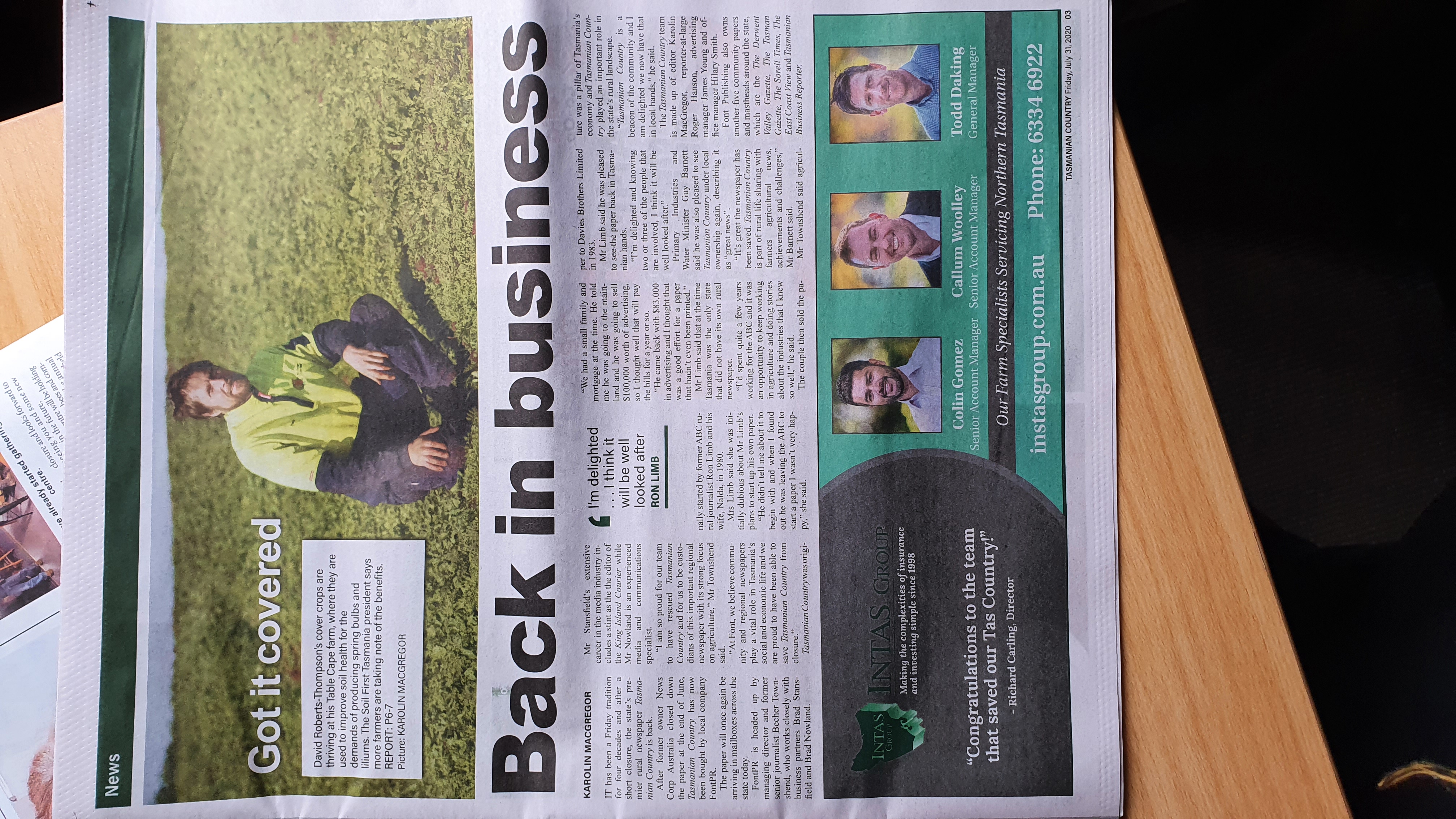 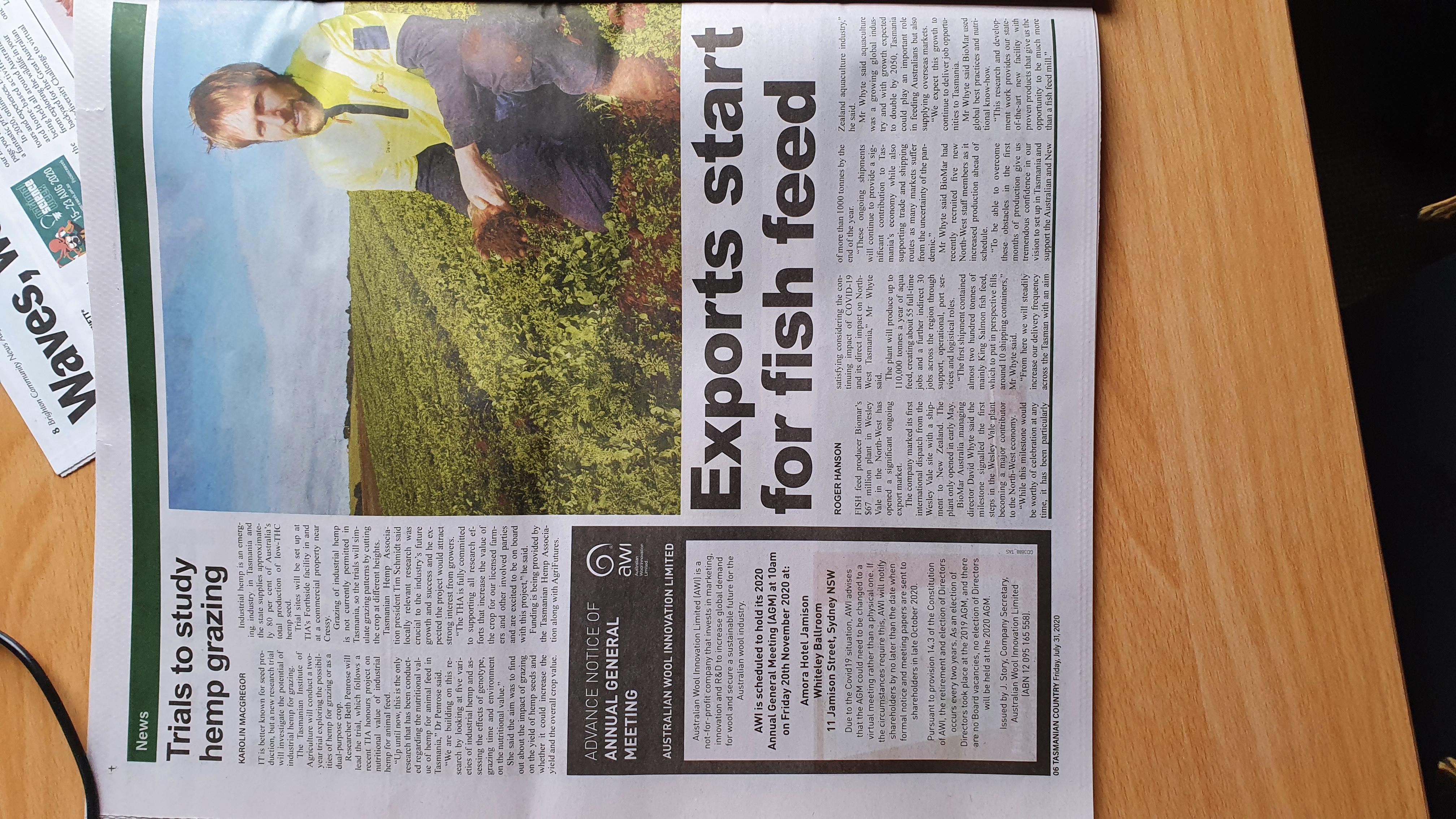 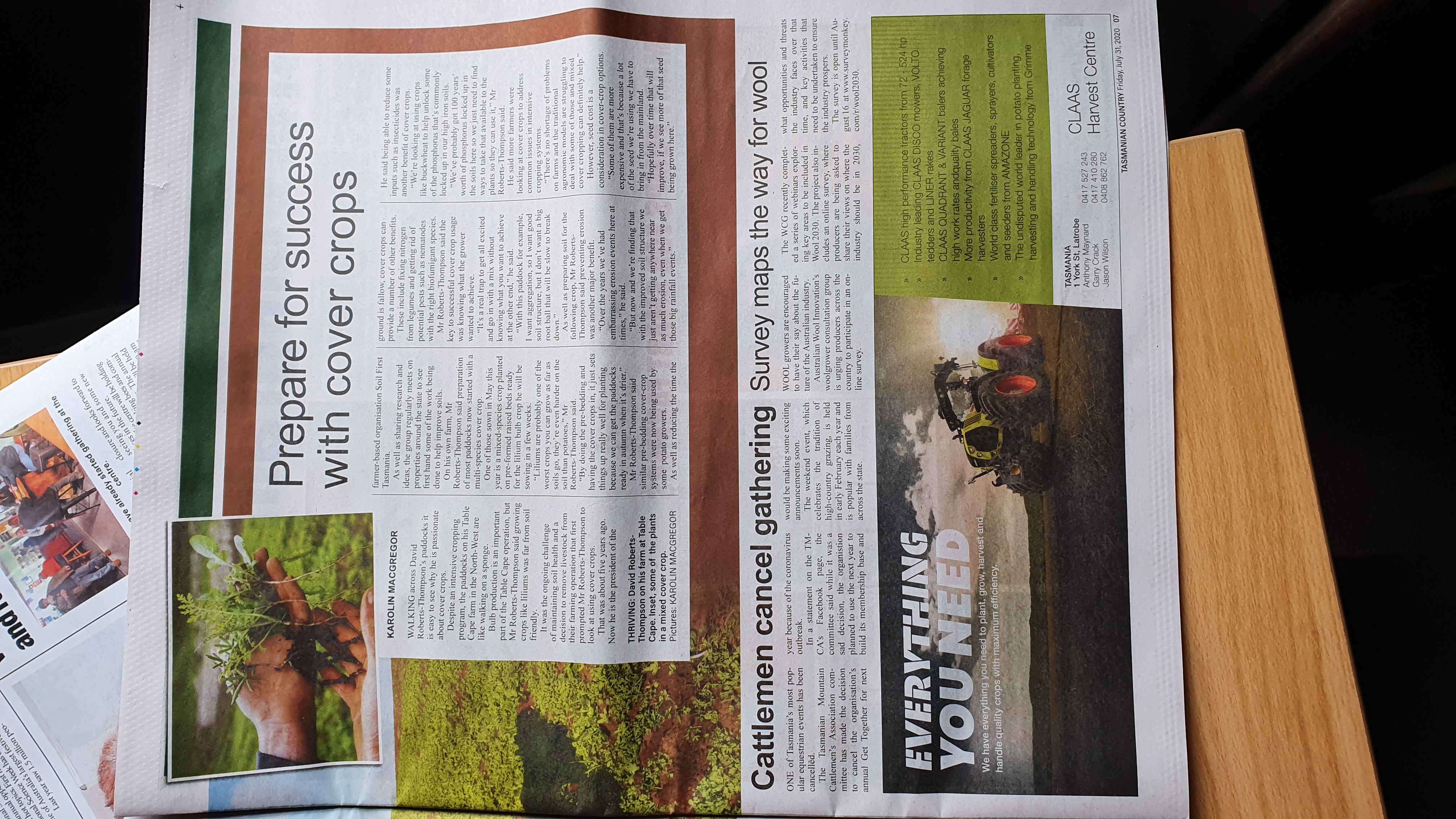 "David Roberts-Thompson's cover crops are thriving at his Table Cape farm, where they are used to improve soil health for the demands of producing spring bulbs and liliums.  The Soil First Tasmania president says more farmers are taking note of the benefits." Tasmanian Country reports.

The research trial will span two years and investigate the possibilities of hemp for grazing.

"Up until now, this is the only research that has been conducted regarding the nutritional value of hemp for animal feed in Tasmania." Dr Penrose, who is leading the trial, has said.

"We are building on this research by looking at five varieties of industrial hemp and assessing the effects of genotype, grazing time and environment on the nutritional value."

David Roberts-Thompson has experimented with cover cropping for some time now.

"Walking across David Roberts-Thompson's paddocks it is easy to see why he is passionate about cover crops" the reporter has said.

David says that with cover cropping, they are finding that their soil structure is improved and erosion is dramatically reduced.  They are also able to reduce some inputs such as insecticides.

Landcare Tasmania member group Soil First Tasmania work to bring together ideas and practices to build a community of farmers improving their soil.

"As well as sharing research and ideas, the group regularly meets on properties around the state to see first hand some of the work being done to help improve soils."  Tasmanian Country reports.

Tasmanian Country back in business to share the 'world of Landcare' 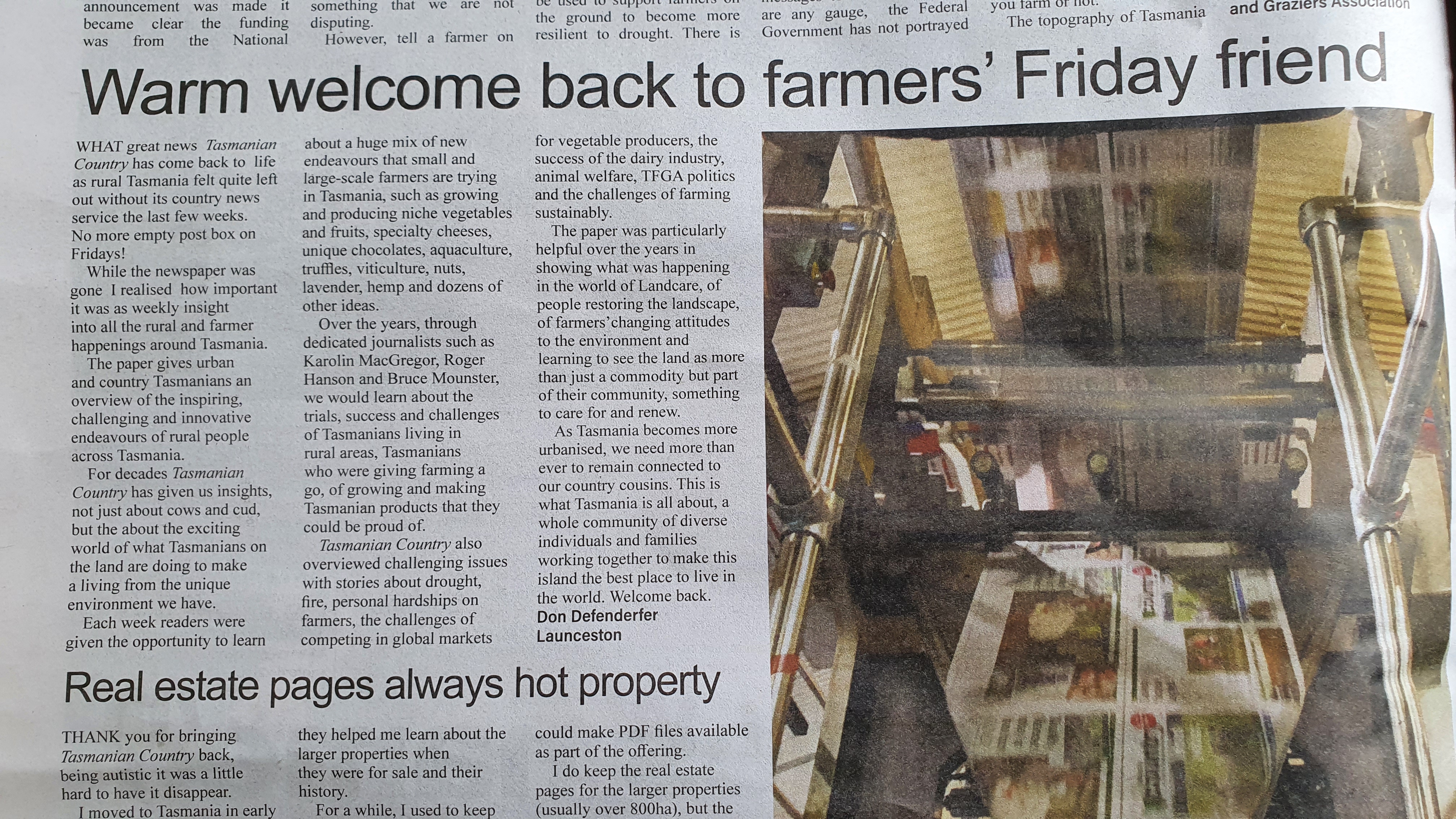 Don Defenderfer, who was was State Coordinator of Landcare Tasmania for many years, writes a letter of gratitude to the Tasmanian Country for its pivotal role in sharing Tassie's country news! "No more empty post box on Fridays!" he says.

"The paper gives urban and country Tasmanians an overview of the inspiring, challenging and innovative endeavours of rural people across Tasmania."

Don notes their special contribution in sharing the world of Landcare with the community.

"The paper was particularly helpful over the years in showing what was happening in the world of Landcare, of people restoring the landscape, of farmers' changing attitudes to the environment and learning to see the land as more than just a commodity but part of their community, something to care for and renew."

"As Tasmania becomes more urbanised, we need more than ever to remain connected to our country cousins.  This what Tasmania is all about, a whole community of diverse individuals and families working together together to make this island the best place to live in the world."

*Calling all members to send us pictures of YOUR GROUP IN THE NEWS! - if your group is featured in the media let us know about it and we can feature it here!*